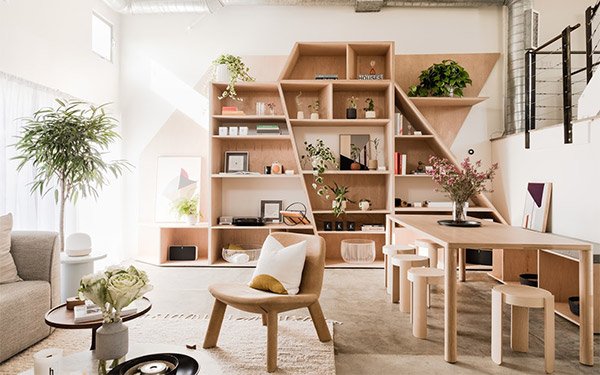 “As Hunker continues to cement its place within the home category, it’s become important to have a physical space for experiential programming that is authentic to who we are as a brand,” stated Jason Lepore, vice president-general manager for Hunker.  It's someplace for “our brand partners to tell their stories and interact with consumers ...”

The Hunker House showcases the brand's aesthetic, with art and design inspired by the surrounding neighborhood, featuring local artists and brands.

The design elements were curated by Hunker’s editorial team and led by editor-in-chief Eve Epstein.

“If the Hunker brand were a home, it would be this house,” stated Epstein. “We wanted to create a physical embodiment of the Hunker identity: a headquarters where the helpful meets the inspirational for real people designing real spaces."

She added: "Hunker House isn’t a pop-up, but a permanent platform for telling culturally relevant stories and working with like-minded partners.”

Hunker will host both public and private event programming, such as DIY workshops, panel discussions, dinners and industry mixers.

Hunker House will have a "hosting" component where digital influencers will be invited to stay at the house — and likely use it as a backdrop for Instagram posts and YouTube videos.

The first to stay in the Hunker House are digital influencers Roshanda Cummings and Erin Johnson, known as @BrownKids, a Baltimore-based minimalist design couple.

The first Hunker House event will be hosted by Blu Dot, a Minneapolis-based furniture company. The event will celebrate the official launch of the house on January 31.

Earlier this month, Hunker announced a partnership with The New York Times on a content hub featuring lifestyle and design articles from both publishers, called “How We’re Living.”

Hunker is owned by Leaf Group, the rebranded Demand Media. Created in 2017, it is one of a number of verticals launched by Leaf Group from specific categories that did well on its Livestrong and eHow sites.