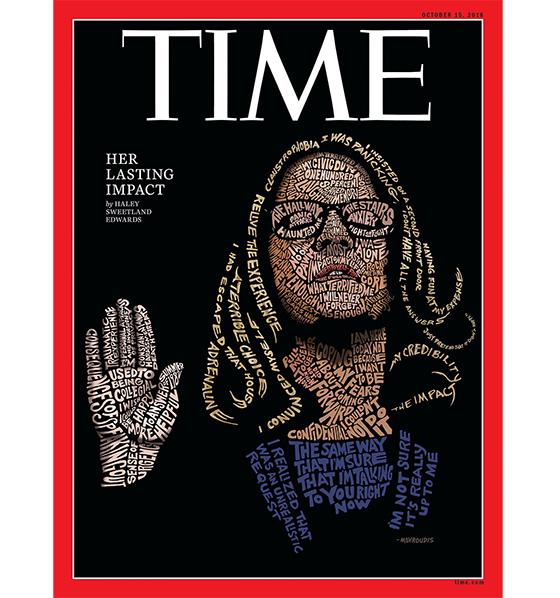 The American Society of Magazine Editors (ASME) named Time's “Her Lasting Impact" October 15, 2018 cover its magazine "Cover of the Year," capturing Dr. Christine Blasey Ford as she raises her hand to swear in at the Senate Judiciary Committee hearing, where she accused Supreme Court nominee Brett Kavanaugh of sexual assault.
The illustration, by San Francisco-based artist John Mavroudis, uses words and phrases from Ford’s testimony to create her likeness.

Mavroudis drew each letter by hand.

"The memory quotes would be attached to her forehead area, and the quotes about wanting to help I placed on her hand. The hand could be seen as welcoming, but also deflecting," Mavroudis told Time in October.

Over 200 magazine covers were considered in the 13th annual ASME Best Covers Contest. Some 100 editors judged the covers, and 100,000 participants on Facebook helped to choose the cover for the Readers’ Choice award, which was Billboard’s issue featuring Korean boy band BTS.

New York’s “How to be an Artist” cover won Best Service and Lifestyle, and its “It’s the Corruption, Stupid” cover, featuring President Trump with a pig’s snout, won the award for Most Controversial.

The award for Best Fashion and Beauty cover went to InStyle, for its “Badass Women Issue,” with a photo of Serena Williams, and the Best Travel and Adventure award went to Travel + Leisure and its cover with sea turtles.

The award for Most Delicious went to Food & Wine’s “Eat With Your Eyes” cover, and the award for Brainiest cover went to National Geographic's “Planet or Plastic?” issue.