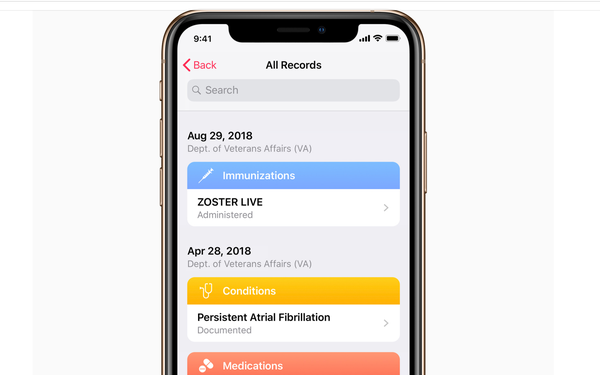 Health records data includes allergies, immunizations, lab results and medications, and is displayed along with other information packaged in one place. It will also include data from a user’s Apple Watch. All Health Records data is encrypted and protected with the user’s iPhone passcode, Touch ID or Face ID.

“When patients have better access to their health information, they have more productive conversations with their physicians,” said Jeff Williams, Apple’s COO, in a statement.  “By bringing Health Records on iPhone to VA patients, we hope veterans will experience improved healthcare that will enhance their lives.”

The VA provides service to veterans over 1,243 facilities all over the U.S.

Ultimately, health care service and record-keeping may have a bigger presence on cell phones, through search engines like Google and via online retailers like Amazon. All these entities, plus Apple and others, may ultimately be angling to fill prescriptions and act as a broker for other health services.

The Wall Street Journal reported in November that Apple had been working with the Veterans Administration on the records service since 2017. The paper said Apple may have provided engineering support to the VA.

Health Records on iPhone, still in the beta phase, was announced in March 2018, and has already attracted hundreds of participants, from individual physicians to nationally known facilities like the Cleveland Clinic and community hospitals like the Monroe County Hospital and Clinics in Albia, Iowa.

The VA laid the groundwork for the Apple app when it launched its first health application programming interface late last year, which it said would allow veterans “to interact with their own personal health data within innovative mobile and web-based apps.”

And several government agencies, including the VA, are participants in the federal government’s Blue Button program started during the Obama administration, which lets some employees, veterans and Medicare recipients check medical records online.