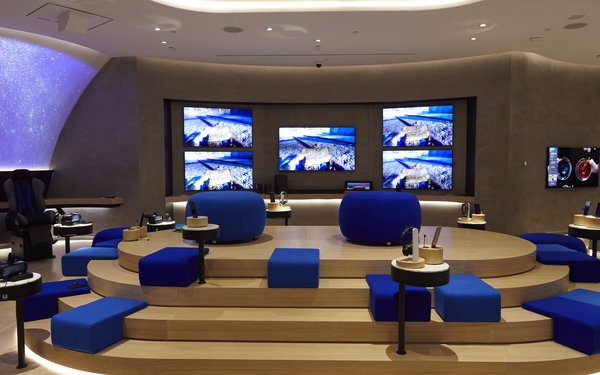 While some old-line retailers are closing brick-and-mortar stores, or being forced out by a lack of customers,  Internet companies like Amazon, Apple, Everlane, Warby Parker and more have jumped into the physical versus virtual landscape..

And Samsung to that list. On Feb. 20, it will open three Samsung Experience stores: The Americana at Brand in Los Angeles; Roosevelt Field on Long Island in Garden City, N.Y. (pictured above): and The Galleria in Houston.

The mobile company puts out its first welcome mat 18 years after Apple opened the doors to its Tyson’s Corner, Va. store, the first of 271 in the U.S. and 506 in 25 countries.

It’s a stretch to say there’s a race by tech or online businesses to find a storefront to rent, but several clothing “Insta-famous” designers who attracted business via Instagram have opened shops, according to the website Business of Home. So big and small, publicity online can lead to sales in physical stores, and vice versa.

“We want to build a ‘playground’ for Samsung fans—a place to learn about and try out all of the amazing new products we have to offer,” said YH Eom, president & CEO, Samsung Electronics America. (Retail areas also called Samsung Experience already exist in many Best Buy stores.)

The new stores will show off -- and also sell -- Samsung products beyond phones, like the company’s 4K and 8K TVs. The Experience outlets will feature an “immersive 4K gaming lounge,” and let customers create artificial-reality emojis.

Until now the only separate Samsung physical showplace in the U.S. was in New York’s Meatpacking District, though it has opened some pop-up stores in the past and will open a few others next month around the nation.

That Meatpacking location at 837 Washington Street will also be the first place in the country where consumers can touch the new foldable Samsung smartphone and the Galaxy S10, the latest iteration of that super-popular smart phone line.

Those will be introduced in San Francisco at a “Galaxy Unpacked” event celebrating the 10th anniversary of the Galaxy line. Consumers can also attend if they download an invitation.