Mastercard Hopes You Like The Sound Of Using Its Card 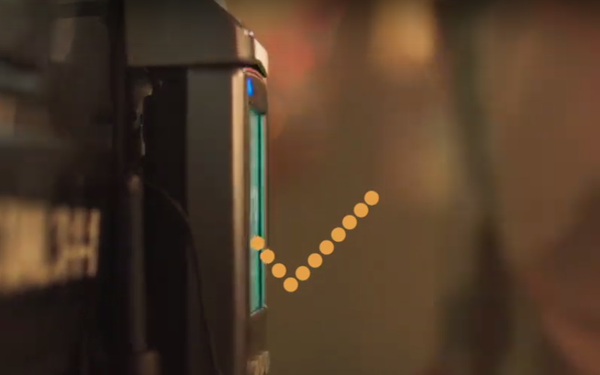 In January Mastercard started the process of removing its name from its logo, just leaving the iconic intersecting red and yellow circles to identify the brand.
Now it’s letting itself be identified in a different way, but still without words.

In a commercial during the recent Grammy Awards, Mastercard introduced a new “sonic logo”: a six-note melody that will eventually accompany all Mastercard transactions, probably starting with online sales and then eventually in stores all around the world.

The whole integration could take three to five years to complete.

The sonic logo makes sense. Mastercard points out that “voice shopping” is expected to become a $40 billion marketplace by 2022, and audio is a way consumers will increasingly identify brands. If you can “hear” Mastercard, it’s likely to make an impression. And after all, music is the international language.

Right after the Grammys, the point-of-sale version began sounding off at the tony Fred Segal clothing store on Las Angeles’ Sunset Boulevard, but it appears it will take a bit longer to filter down to the local Kroger in your town. You’ll hear it in a commercials, of course.

And if you call Mastercard, you might hear the tune if you’re put on hold. It’s also coming soon as a part of a a new smart speaker skill.

“Sound adds a powerful new dimension to our brand identity and a critical component to how people recognize Mastercard today and in the future,” says Raja Rajamannar, Mastercard’s chief marketing and communications officer.
“We set out an ambitious goal to produce the Mastercard melody in a way that’s distinct and authentic, yet adaptable globally and across genres. “
The Mastercard sound, a not-too-jingly melody, will eventually come in lots of versions, similar, it would seem, to the way television newscasts have a standard theme song and another, more serious one on days a major tragedy occur.
“From a retail perspective, the flexibility of our melody is critical so the brand is delivered in a contextually relevant manner,” a spokeswoman elaborated. “So for example, if you’re making a purchase from a toy store you may hear a more playful version of the sonic brand, whereas if you’re in a theatre it will be more cinematic or in a video game store you will get a gamified version of the brand. All while maintaining the same core melody.”

Right now, Mastercard is able to let journalists hear versions with names that more or less explain the vibe--like Operatic, Bogota, CapeTown and more that use different instruments and tempos.

Mastercard isn’t the first brand to use a tone to identify itself. To name just one, the NBC chimes were the signature sound used by that radio network starting in 1926, and it still is heard on occasion on its TV properties. It was originally was just a device to synchronize program start times with other stations in the fledgling chain but eventually became an identifying sonic logo, though slightly altered over time.

Mastercard may like to stress the importance of an ID on its credit cards, but it gives no credit to the writer of its audio signature.

Over an 18-month gestation period, “We tapped many agencies, musicians and artists from across the globe to ensure the foundational Mastercard Melody was memorable
and drove familiarity while also remained flexible enough for local interpretation and contextual relevance,” the spokeswoman said.

“No one person wrote the music, it was a mix of talent, agencies and groups,” she said. MasterCard did run the tune by Mike Shinoda of Linkin Park, who, she said, gave “tremendous positive feedback.”