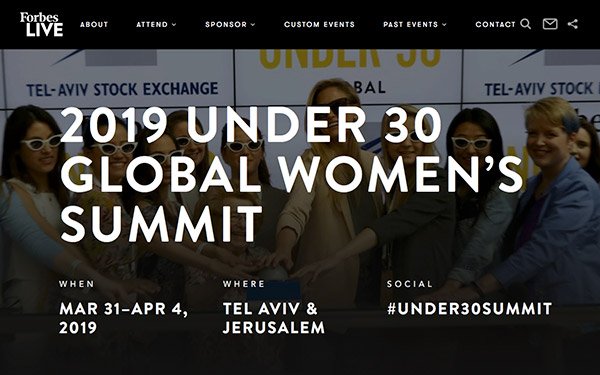 This year, Forbes’ Under 30 Global Summit will focus on women, bringing together young entrepreneurs from around the world to discuss “the ways in which women are harnessing their power to reshape the way we invest, invent and live.”

With movements like #MeToo and historic levels of women running for Congress and President, “this is not the year of women or the decade of women, but the era of women,” Maggie McGrath, editor of ForbesWomen, the platform dedicated to covering women and leadership, told Publishers Daily.

However, McGrath noted there is a 25% dip in the number of women CEOs of Fortune 500 companies. Though women make up about half the population, less than 3% of the millions of dollars of venture funding goes to women-led startups.

“There’s a need to invest in more diverse perspectives to help close the gap,” she stated. “Our hope is these discussions shine a brighter spotlight on many issues, including the need for more investment in women at every stage in their career.”

The past two years, the Under 30 Summit held a Women@Forbes Under 30 event, a day of programming and networking dedicated to the women on the Forbes Under 30 lists.

“It is a natural extension for us to make it a full summit dedicated to this topic and this community,” Jessica Sibley, Forbes' Chief Sales Officer, told Publishers Daily.

“With the Global Women’s Summit, we have a great opportunity to champion and spotlight women entrepreneurs around the world,” Sibley said. “Most importantly, we can really advocate for women-led businesses and how incredible entrepreneurs achieve their goals.”

It is “to be determined” if the Under 30 Global Women’s Summit continues with its female entrepreneurship focus in 2020.

The conference in Israel brings together an “international group of women and men, and it is very immersive, very experiential and focused on the under-30 community. The group is so engaged and ready to network, talk and share ideas,” Sibley added.

McGrath said she has seen entrepreneurs meet at Forbes’ summits and foster partnerships, such as two cricket protein companies that merged after meeting at one of their conferences.

Israel is one of the “most diverse startup capitals in the world,” Sibley said, making it the right place to host this summit. Forbes also has conferences in other international cities, such as Hong Kong and Amsterdam.

The Under 30 Global Women’s Summit will take place in Tel Aviv and Jerusalem from March 31 to April 4.

The presenting sponsor of the summit is J.P. Morgan. Returning sponsors include Charles and Lynn Schusterman Family Foundation, the Paul Singer Foundation, Startup Nation Central, the Pratt Foundation and the One8 Foundation.