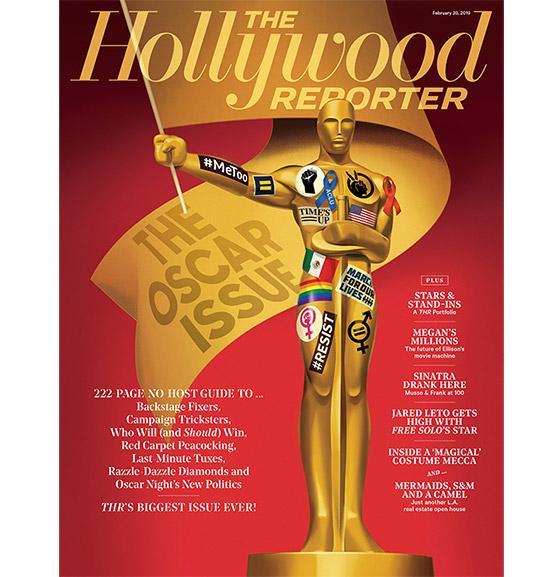 Publishers are preparing for the upcoming Oscars: The Hollywood Reporter has released what it is calling its biggest magazine issue ever, dedicated to the Academy Awards, while USA Todayhas released an augmented reality experience around the costumes of Oscar-nominated movies.

The theme of The Hollywood Reporter’s issue is "The Politics of Oscar," with a cover story on this awards season’s embroilment with political issues, leaving it with no host for Sunday's show.

The Hollywood Reporter’s 2018 Oscars issue was also tagged as its largest ever, at 200 pages, and the year before that, at 100.  (THR's weekly print magazine typically averages between 80 and 110 pages.)

The cover photo features an illustration of the Oscar award, holding a flag, and covered in stickers representing a number of social and political movements: #MeToo, #Resist, Black Lives Matter, LGBTQ rainbow, the Mexican and United States flags, Time's Up, March for Our Lives, among others.

Brands want to appear in the issue because “it is our most high profile of the year,” THR editorial director Matthew Belloni told Publishers Dailylast year.

Separately, USA Today has launched an augmented-reality experience dedicated to the costumes and designers of Oscar-nominated movies, including “Mary Poppins Returns,” “The Favourite,” “Mary Queen of Scots,” “Bohemian Rhapsody,” “Black Panther” and “BlacKkKlansman.”

The experience is a collaboration between USA Today’s emerging technology team and its Life team.

Outfits from the movies are available to explore in the AR experience, which went live in USA Today’s Android and iOS app Monday.

It gives users a 360-degree look at the costumes, in users' own homes, with mobile AR technology. (Think Pokemon Go-style, where you can see the costumes as if they were in your living room.)

“Unlike many other AR experiences, our goal wasn’t to use AR to tell part of the story. Our AR experience is the story,” stated Ray Soto, director of emerging tech at the USA Today Network. “With multiple layers of interactivity between the user and the costume designers, audiences can glean an almost one-on-one experience with the creators of their favorite costumes from these Oscar-nominated films.”

USA Today’s first AR release this year was in January, featuring an experience with Washington Capitals defenseman John Carlson and an interview about his professional hockey player career.

Over a dozen emerging technology projects are in the works for 2019 at USA Today Network.