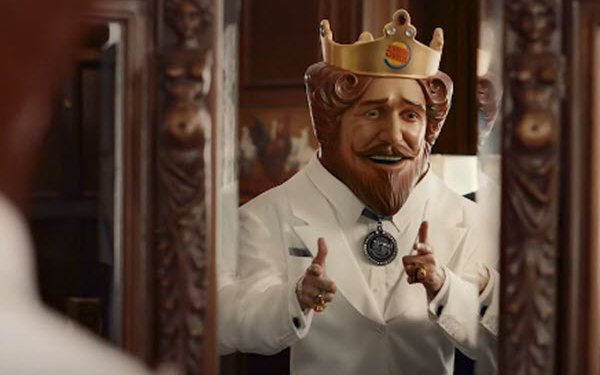 Burger King is up to its usual mischievous ways — this time to promote its new grilled chicken sandwich.

The QSR and MullenLowe U.S. are out with an ad (below) showing someone dressing in a white suit, as a Southern-accented voice declares:  “When we’re talkin’ about flame-grilled chicken, there’s only one way to go…K.F.G.”

Whereupon the white-suited one is revealed to be BK’s bizarrely big-headed King mascot as “K.F.G.,” or the “King of Flame Grilling,” rather than the expected reveal of another actor playing Colonel Sanders.

The 30-second video is running on YouTube and the brand’s other social channels starting today, and as a paid online and social video starting March 4.

A 15-second version will air on TV, also starting March 4.

The $4.99 chicken sandwich, which includes lettuce, tomato and honey mustard on a roll, will be a permanent menu item at participating BKs.