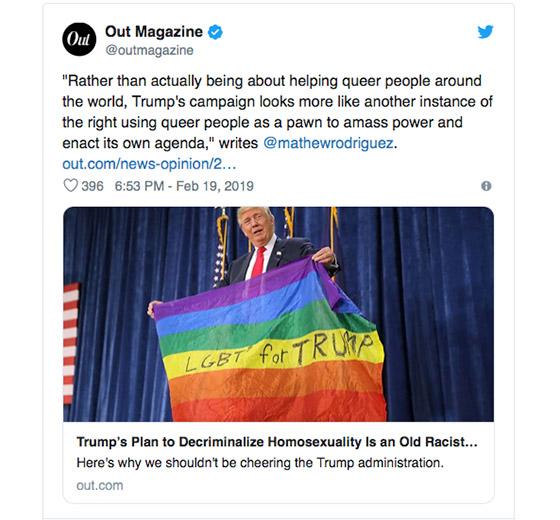 The State Department this week said Richard Grenell, the openly gay U.S. ambassador to Germany, is holding a “strategy meeting” with European activists about an initiative to take aim at Iran over its human-rights abuses, NBC News reported.

Grenell has lambasted the Islamic country for its brutalization of the gay community and recently criticized its “barbaric public execution” of a 31-year-old Iranian who was hanged for violating the country’s anti-gay laws.

He cites a Guardian report from 2015 that said enforcement of anti-gay laws had softened somewhat. Homosexuality is an “open secret” and most queer people fear homophobic reaction from fellow citizens more than the authorities, according to Rodriguez’s telling.

Rodriguez said the Trump administration’s effort to decriminalize homosexuality worldwide is an “old racist tactic” that distracts from its failures to help the LGBTQ+ community in other ways.

Those shortcomings include the transgender military ban, reversal of plans to include LGBTQ people on the 2020 US census and an “ill-conceived plan to address the HIV/AIDS epidemic” after “an abysmal record on addressing the virus,” Rodriguez writes.

He says the Trump administration is using the gay community as a pawn in its broader effort to contain Iran. The United States reimposed economic sanctions on Iran in November to hinder its ballistic missile program and military activities in the Middle East, especially in war-torn Syria and Yemen.

Rodriguez isn’t alone in his skepticism.

“If this commitment is real, we have a lot of questions about their intentions and commitments, and are eager to see what proof and action will follow,” Jeremy Kadden, senior international policy advocate at the Human Rights Campaign, stated in the Daily Beast.

I hope to see some follow-through after the initial rush of publicity.

Unfortunately, Out magazine and the Human Rights Campaign's criticism rings hollow considering how woefully inadequate they are in speaking out for Iran’s LGBTQ+ community. They would have greater credibility if they realize it’s possible to applaud the administration’s efforts to promote gay rights, while still pointing out areas that need improvement. The two viewpoints aren’t necessarily contradictory.

The LGBTQ+ community is a diverse group with a rich cultural history underpinned by freedom of expression. It suffers when people feel scared to speak out amid the lockstep, anti-Trump group-think.

“Yes, this is the same magazine I worked for as Editor-at-Large before they fired me, almost two years ago to the day, for saying ‘I don’t hate Trump, I like free speech, journalism is in the gutter, and the left is a little crazy,’” Moore said.