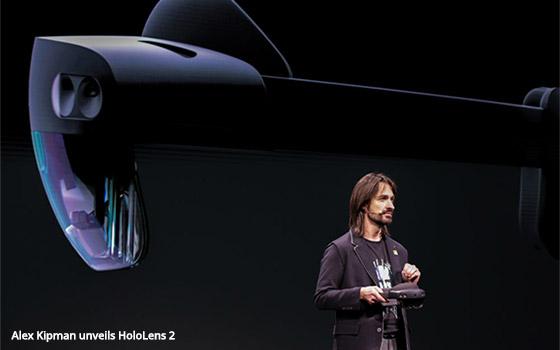 A world with images virtually floating in mid-air rather than being displayed on traditional, physical screens is getting a bit closer.

At a press event Monday before the opening of MWC, Microsoft launched HoloLens 2, its next generation of mixed reality.

The new wearable has features that move beyond the original HoloLens introduced in 2016, and promises to take augmented reality to a new level.

The headset has a visor and lets a viewer see and interact with holograms, as detailed in a Microsoft video.

Unlike virtual reality, The HoloLens 2 lets the wearer see the physical world around them combined with holographic image.

There are numerous potential uses for the device, such as using holograms for remote video conferencing or planning a physical space while sharing the design and editing it in real-world scale.

A wearer can reach out and move holograms as if they are real objects, and the visor can be flipped up to switch tasks and share holograms with other HoloLens users or even stream the HoloLens experience to a wireless display.

The headset can be worn over glasses, and has a reported battery life of up to three hours of active use.

At $3,500, the HoloLens 2 is not yet a consumer device. However, it is a great example of where the visual aspects of computing are heading, moving traditional viewing screens into spaces around the individual.

The viewing screen of the future is floating in space.