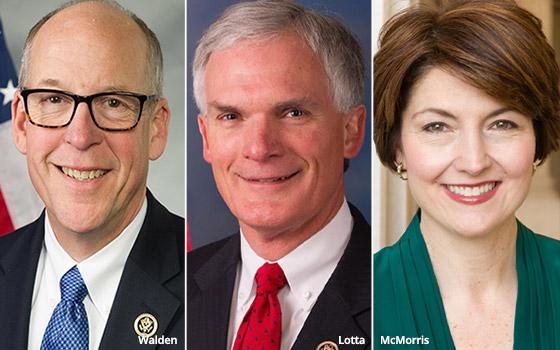 House Republicans are asking Democrats to support “reasonable” net neutrality bills that would reinstate some -- but not all -- of the Obama-era rules.

“We all agree on the need to legislate baseline protections for net neutrality, open internet, or whatever new term may be coined for the consumer protection principles that are supported by Republicans and Democrats alike,” Republican Reps. Greg Walden (Oregon), Bob Latta (Ohio) and Cathy McMorris Rodgers (Washington) write in a letter to the Democratic leaders of the House Energy and Commerce Committee, and the Subcommittee on Communications and Technology.

The GOP signatories are promoting bills that would ban Internet service providers from blocking or throttling service and from charging higher fees for prioritized delivery of content. The lawmakers say their proposals are “reasonable and achievable” and would “give us a path to protect consumers without invoking the heavy hand of Title II.”

The general conduct standard restricts broadband carriers from engaging in “zero-rating” their own content -- which occurs when carriers exempt their own video streams from consumers' data plans. Doing so gives consumers an incentive to stream video from the service provider -- like AT&T or Comcast -- as opposed to companies like Netflix and Amazon.

When the Obama-era FCC passed those rules, the agency also reclassified broadband as a “telecommunications” service, bringing it In under Title II of the Communications Act. That move gave the FCC the legal authority to impose privacy rules on broadband carriers.

The current, Republican-led FCC voted in 2017 to repeal the prior rules. FCC Chairman Ajit Pai says the former rules were "heavy handed" and depressed investment. But net neutrality advocates say the Obama-era rules are necessary to prevent Comcast, AT&T and other broadband providers from censoring sites or discriminating against competitors like Netflix.

Net neutrality proponents -- who generally supported the prior FCC's decision to impose privacy rules and to ban practices like zero-rating -- say the GOP's proposed federal legislation is too narrow.

“There is more at stake in the battle for net neutrality than preventing ISPs from blocking, throttling, or engaging in paid prioritization,” the Electronic Frontier Foundation writes. “Bills that are limited to those three rules ignore the high-speed cable monopoly problem that tens of millions of Americans face, and how a lack of privacy protections harms broadband adoption.”

But Walden and the other Republicans suggest it won't be possible to pass legislation that fully restores the 2015 rules.

“We ask that you reject the special-interest groups who insist on Title II or nothing,” they write. “Their approach will not lead to bipartisan legislation that the President would sign into law.”