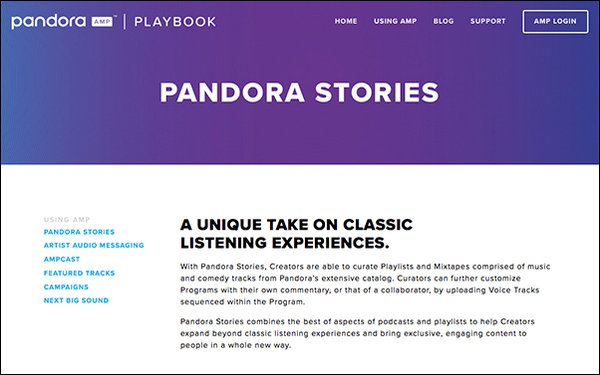 Trying to keep up with Apple Music and Spotify, Pandora just launched Stories -- a tool to help artists capitalize on the current popularity of podcasts.

With Stories, artists can create music playlists interspersed with voice tracks, which Pandora is hoping they will use to share personal stories and other engaging subject matter.

“Podcasts can tell stories about music, but it’s difficult to include full songs. Regular playlists have songs but lack personal context from the artists behind them,” stated Zuchowski. “We’ve created Pandora Stories to fill that void.”

Pandora also sees Stories as an opportunity to open music-driven storytelling to a wider realm of creators, including actors, filmmakers, athletes, authors and others with a story to tell.

To do so, Pandora is offering its full catalog of licensed songs for creators to contextualize their stories and bring them to life.

While they have been around for years, podcasts are clearly having a moment.

Spotify just paid about $337 million for podcasting companies Gimlet Media and Anchor FM, while the Swedish streaming giant said it plans to spend $500 million on podcasting investments this year.

Additionally, Spotify CEO Daniel Ek called podcasting “the next phase of growth in audio” in a recent blog post.

By next year, annual podcast ad revenue will reach $659 million, according to an IAB forecast.
audio, digital, music, podcasts
Next story loading