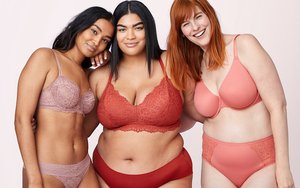 Poor Victoria. The one-time darling of all specialty retailers is back on the bad-news runway, with parent company L Brands reporting yet another decline in sales and profits — the same week that Target launched a major bra-and-underwear assault.

L Brands, based in Columbus, Ohio, says same-store sales at Victoria’s Secret stores dropped another 7% in the fourth quarter and 6% for the full year. Combined with online revenues, the brand’s sales fell 3%.

While Victoria’s Secret continues to be the market leader in women’s underthings, it’s been under steady assault. Part of the issue is out-of-step marketing, with women increasingly scorning the brand’s bone-thin supermodels and I-wear-itchy-bras-for-the-men-in-my-life positioning. American Eagle Outfitters’ Aerie, for example, has seen sales rise steadily since banning photo retouching and switching to real-life models.

Part of Victoria’s decline is also about products, with younger women opting for cozy unstructured bralettes over lace-and-wire confections. And some is due to market disruption, with a host of upstart brands, including ThirdLove and True & Co., providing new levels of service, selection and styles.

This week, Target announced not one but three major new lines, all in direct competition with Victoria’s Secret. Auden, the most ambitious, is a collection that takes size inclusivity to a whole new level, with 200 different kinds of bras in 40 styles and 200 underwear options in 50 styles. And every item is priced at $22 or less. Key to the collection is an online tool called Find Your Fit

And just as Victoria Secret’s Pink brand is aimed at teens, Target is rolling out Colsie, with 20 intimatewear styles and 30 options for lounge and sleepwear. It too is offered in extended sizing, up to 3X.

Finally, a sleepwear collection called Stars Above offers 125 options, sized up to 4X.

The company says it fit-tested the collections on hundreds of women, and that both the in-store and online experience is meant to make everyone feel good about shopping, shoring up the body-positive message with marketing themed “No Body Like You.”

Separately, Target announced a new limited-edition partnership with preppy lifesstyle brand Vineyard Vines, with plans to introduce 300 items in May. Previous partnerships, some of which have caused online pandemonium leading to site crashes, have included Missoni and Lilly Pulitzer.