How To Be Human 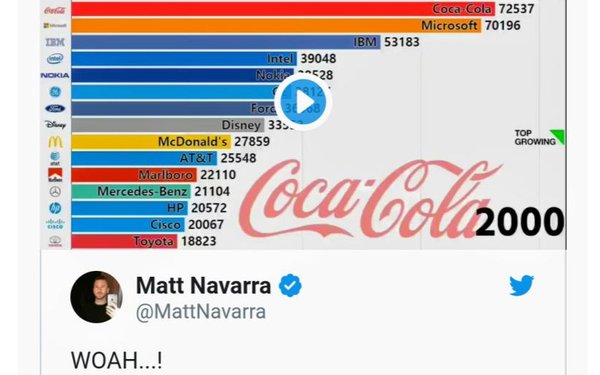 British social media consultant Matt Navarra got some attention recently when he tweeted an animated, time-lapse visualization of the top brands' value changing in real-time over a 19 year period. The visualization was a powerful reminder about the value of looking at longitudinal change, but it also sparked a debate on Twitter about the underlying values the data represent.

The data in the visualization came from Omnicom's Interbrand unit's annual "Best Global Brands" study, which utilizes a proprietary method to calculate "how your brand is contributing to business growth today."

According to Interbrand's methodology statement, it factors three major criteria -- financial, role of brand, and brand strength -- using a combination of "internal" and "external" factors.

The concept is not unique, and others have methods for assigning brand value to bottom lines, but what made Navarra's tweet so striking was the way it was visualized. It's one thing to look at brand value shifting periodically over time, but when it's time compressed, it creates an emotional dynamic that alters the way we perceive the value of the data. Just watch how tech giants Apple and Google overtake the brand value of Coca-Cola, IBM and Microsoft in minutes vs. decades, and you'll get the idea.

In a world of virtually infinite data, how it is represented, and especially, how we communicate it with each other, is becoming as, if not more important than the underlying data itself. Yes, there are times when data is empirical knowledge, representing the explicit value of things -- Nielsen ratings, currency markets, etc. -- but oftentimes, it is the way we perceive and process the data as human beings that frames its value for us.

In a world of advanced AI processing, I don't necessarily think this is a bad thing. I think it's still important for humans to assign emotional values even to the most scientifically processed data, because data is just a guidepost for human judgement. Even if humans are assigning those outcomes to machines to process.

Last week, I reported on the findings of a new report published by the CMO Council and Harte Hanks, which found that most marketers feel they are doing only an okay job at best of listening to the behavioral signals of their human customers.

Worst of all, the report, entitled "Bringing A Human Voice To Customer Choice," also found that a significant number of senior marketing executives (29%) are having a hard time thinking of their customers as "humans" instead of "targets."

“Developing the human experiences that customers are looking for can feel confusing for the data-and-technology-driven marketer of the 21st-century,“ noted Harte Hanks CEO Bant Breen, a well-known veteran of Madison Avenue. “In every point of connection, our customers leave small data clues behind that can enrich our current profiles and give brands the insights needed to craft the right combination of message, channel and timing. Customers will always tell us what they need. The real question is are we listening?” 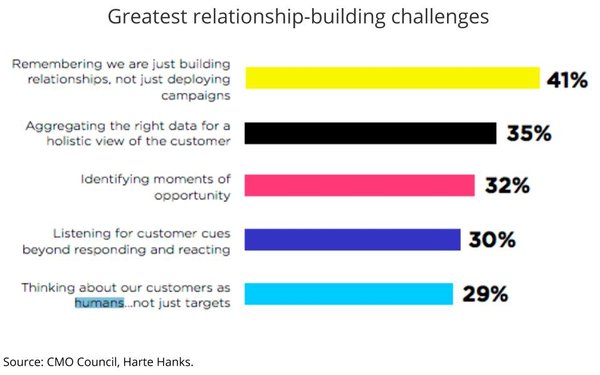 1 comment about "How To Be Human".
Check to receive email when comments are posted.
Next story loading