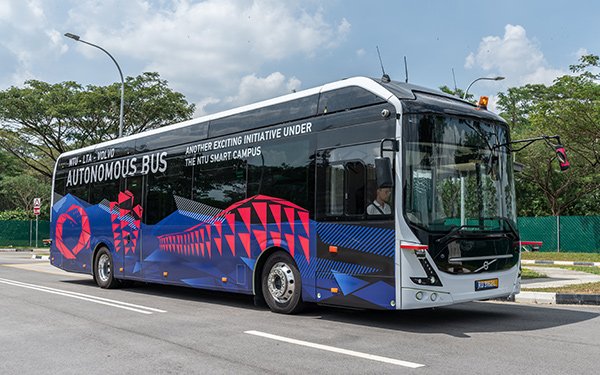 Volvo is launching what it calls the world’s first fully autonomous electric bus.

The 85-passsenger Volvo 7900 Electric bus, which comes with sensors and navigation controls managed by an artificial intelligence system, was demonstrated in Singapore today.

The 39-foot bus will begin trials at the Nanyang Technological University (NTU) in Singapore following preliminary testing it recently completed at the Center of Excellence for Testing and Research of Autonomous Vehicles.

Plans are to test the bus on the NTU campus and then extend its routes beyond the university.

The Volvo and NTU partnership is part of a collaboration between the university and the Land Transport Authority (LTA).

“Our electric bus featuring autonomous technology represents an important step towards our vision for a cleaner, safer and smarter city,” stated Håkan Agnevall, president Volvo Buses. “The journey towards full autonomy is undoubtedly complex, and our partnership with the NTU and LTA is critical in realizing this vision, as is our commitment to applying a safety-first approach.”

The AI system, developed by NTU researchers, operates the various sensors and GPS systems on the bus and enables navigation through dense traffic and tropical weather conditions, according to the university.

The bus comes with the Volvo Autonomous Research Platform software and includes light detection and ranging sensing, stereo-vision cameras that capture images in 3D and a global navigation satellite system.