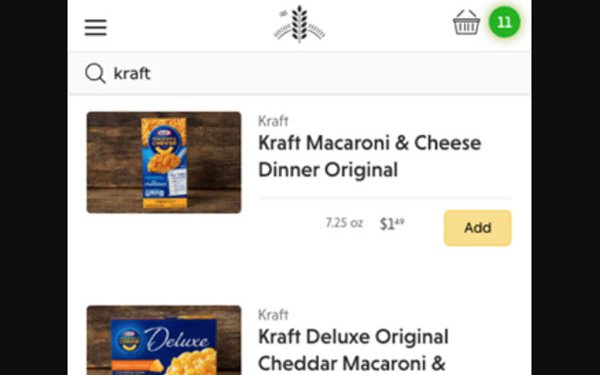 Kraft Heinz — which could use some good PR about now — has unveiled a new direct-to-consumer channel partnership with San Francisco-based online grocer Farmstead.

With the giant consumer packaged goods company still under fire for having surprised investors with bad fourth-quarter news that included a $12.6-billion net loss, evidence of innovation and investment in growth is desirable, to say the least.

Farmstead says it uses artificial intelligence and advanced logistics to predict consumer demand and reduce waste and other costs — enabling it to offer fresh, locally sourced foods at better prices than local supermarkets. That includes low-fee, or in some cases no-fee, 35-minute delivery (some of which is done through a partnership with autonomous/self-driving vehicle company Udelv.)

The online grocer is currently limited to the Bay Area, but has plans to expand to other markets starting this year.

Kraft Heinz already sells its brands through large online marketplaces, including Amazon and Walmart. But like virtually all large CPG marketers, it is pushing hard to expand its DTC channels, thanks to changing consumer product preferences and online’s growing competition with traditional supermarkets.

In addition, partnering with an online grocer associated with fresh food and tech — two attributes close to the hearts of millennials and Gen Zs — might help Kraft Heinz’s image with younger consumers.

While it’s also possible that Farmstead customers might be alienated by the addition of mass-market CPG brands, convenience is, of course, a core driver of ecommerce. Enabling consumers to buy most of their grocery needs in one place is key to making the online business model work, and to geographic expansion.

“Our research shows that most families go to multiple grocery stores to find everything they need within their budget,” said Pradeep Elankumaran, founder and CEO of Farmstead. “Farmstead’s goal is to be the only grocer a household needs. With this Kraft Heinz partnership, we’re now able to source more mainstream grocery items [as well as] the great locally sourced produce they are accustomed to from Farmstead.”

Farmstead originally announced that Kraft Heinz is also participating in its new “Refill & Save” program, offering lower prices on recurring orders — but later said that this was a mistake. Brands available through that program -- with total items now at 300, up from 25 -- include La Croix, Newman’s Own and Kerrygold, according to the company.

In addition to the Farmstead deal, Kraft Heinz this week announced that it has selected the second “class” of innovative food and beverage startups for its Springboard incubation program, started last year.