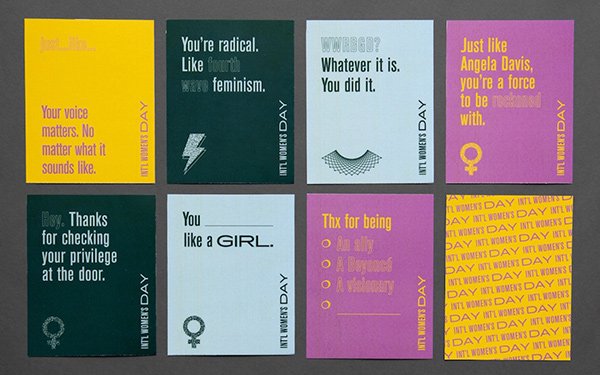 Brands and agencies are rallying around this year's International Women’s Day (IWD) theme #BalanceforBetter with numerous activities and events.

American Express is hosting a unified global celebration that will take place at 25 sites worldwide covering 20 countries featuring panel discussions highlighting how the company can work together to support and empower women. These events will be live streamed from several key locations in order to reach 100% of the company’s workforce.

AE is also working with LinkedIn on social content that encourages people to add “Inclusive Leader” as a skill to their LinkedIn profile, and to endorse those that exemplify this quality.

Brawny celebrates its fourth annual #StrengthHasNoGender with a new anthem film and a multi-year brand partnership with the nonprofit organization, Girls Inc. that includes a $75,000 donation in support of its programming. Cutwater handled the creative and production of the anthem film and Catalyst PR, an Endeavor Global Marketing agency handled the survey and PR support of the campaign.

The specially designed towel packages rolling out in stores throughout the month feature a trio of multigenerational women in place of the iconic Brawny Man.

The U.S. Air Force is leveraging both IWD and the opening of Disney/Marvel's "Captain America" to release its newest spot that introduces the real-life first female fighter pilot in the Air Force Brig Gen Jeannie Leavitt.

The "Origin Spot" creative, developed with 18-year AOR GSD&M, states: “Every superhero has an origin story, we all got our start somewhere, for us it was the U.S. Air Force.” The spot then wraps up with a caption asking “What Will Your Origin Story Be?” and ends with the tagline “Aim High.”

The spot appears across national, youth-focused TV channels, and during NBA games for the first two weeks of March as well as via digital and social media platforms and digital platforms. There will also be in-theater trivia game for movie-goers.

Colle McVoy is distributing IWD-inspired “PREESH cards” (pictured above) with quirky sayings to all agency women on Friday morning along with a blank canvas for everyone at the Minneapolis office to leave quotes, stories, signatures, or affirmations to show their support for the #WomenOfCM.

Ultimate Software and AOR Zambezi are introducing the cloud provider's first campaign in support of IWD and highlight the fact 50% of its total employee population, as well as 50% of its leadership, is female.  The “What I Was Told” campaign highlights some of the challenges and stereotypes many women encounter in their careers, contrasted with what Ultimate feels is its culture of equity.

The campaign includes a 30-second TV spot and a longer version that will run on digital platforms.

Digital experience and design agency YML is using Friday to jumpstart its internal makeover rooted around a poem created by designer Sadhvi Konchada. After a live reading of Empower Her to the 250+ global staff, the words will become YML's manifesto, commemorated on the walls at the agency's Silicon Valley headquarters, as a "permanent fixture reminding all that gender parity is an equal responsibility rested on men and women."

Omnicom's various agencies are unleashing a multitude of projects, including several events hosted by Omniwomen, Omnicom’s internal organization that is dedicated to developing emerging female leaders. Omniwomen France (with support from TBWA\Paris) will be partnering with “La cravate solidaire”, a charity that gathers professional clothes and distributes them to unemployed women to fight against appearance discrimination during job interviews.

Among the Omnicom family, BBDO San Francsco's Instagram campaign will tap an array of celebrities and influencers, like Ashley Judd, to give up their Instagram feeds to give a voice to female leaders and activists around the world.

CPM offices across the globe will participate in a selfie campaign where employees will pose in the #BalanceforBetter stance using CPM-branded selfie-cards. The selfie-cards plus a recap movie will be shared on local and international social media platforms using the hashtags #IWD2019, #BalanceforBetter and #Omniwomen. In addition, local offices will have a variety of activities to recognize its female employees.

And DDB’s North American offices will be recreating black and white photos of its founders Doyle, Dane, & Bernbach. However, the images will be re-enacted by the future of DDB, a.k.a. powerful women in the agency whose first or last names start with “D” or “B”. DDB will share these images on social media.

As part of the Change Pays campaign, which launched with social and video at the World Economic Forum at Davos, S&P Global and agency Publicis New York are debuting a large-sized installation and corresponding Augmented Reality experience to showcase the positive effects of greater women’s participation in the workplace on financial markets.

The installation, on view March 8-March 12, was created with perceptual artist Michael Murphy and is hung from the ribs of the World Trade Center Oculus. Floating 17 feet above the floor, and roughly the size of a New York City bus, the Change Pays installation showcases global currencies and bank notes featuring female portraits to create a typographic illusion.

GS&P’s Talk Shop series is following up on the popularity of the agency's Black History Month-themed discussion with a Women’s History Talk Shop Series.

The executive female leaders of Havas are honoring the women of the agency with a mimosa brunch on Friday as mimosa flowers are traditionally given to women on IWD to symbolize women’s empowerment and independence.
In addition, the Havas network is introducing Read About Her, a zine of women-focused content.

The Wyoming Office of Tourism is embracing IWD by paying tribute to the state's progressive past with new, female-led creative work.The two new spots, developed with BVK, showcase the state through stories of two different women. Wild Girl shows a girl roaming the "cowboy" state while Wild Grandpa follows a grandfather passing his adventurous ways down to his granddaughter.

Lion’s Den and agency, Fancy are launching the adult merchandise retailer's second IWD-inspired campaign that tweaks a vintage poster to proclaim "Women Come First" in a nod that references both romantic and more professional matters. The artwork will be displayed in-store, and used in digital and across social.