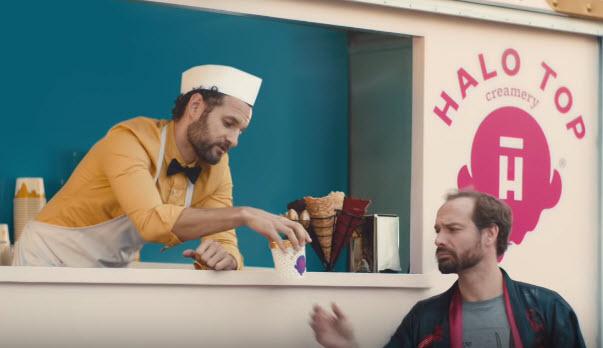 In its first national TV ad campaign, “Ice Cream for Adults,” Halo Top has turned an ice cream truck into an adults-only experience that’s a major bummer for kids.

Turns out the truck’s driver will only dispense his low-cal (280 to 360 calories per pint) Halo Top ice cream to adults, who deserve it to relieve the stress of their horrible daily experiences. But he’s more than willing to dispense existential gloom to the kids who expected to get frozen treats.

In one of the four darkly humorous 30-second spots from 72andSunny New York (below), former “The Bachelor” contestant Nick Viall bursts the happy bubble of two kids experiencing puppy love.

That spot, aired on Tuesday’s “The Bachelor,” marked the campaign’s debut.

In “Mortgage” (screen grab above), a financially struggling dad explains to the neighborhood kids that a mortgage “is like waterboarding, only you do it to yourself.”

Other ads to run across broadcast, digital and social channels throughout the summer include:

In “Work,” a little girl learns that her mom is in a job she hates, trying to make partner at “an ethically questionable insurance company.”

“Swiping” features Stanley, who’s been striking out online for a decade because he’s not photogenic, but “keeps swiping, and swiping and swiping…”  When a little girl says “That’s sad,” the truck driver responds: “That’s life.”

The ads were directed by Tim Godsall.

“We created Halo Top to be able to eat ice cream as much as we wanted -- and I believe everyone can relate to the need for ice cream after a rough day,” said Justin Woolverton, the brand’s CEO and founder.