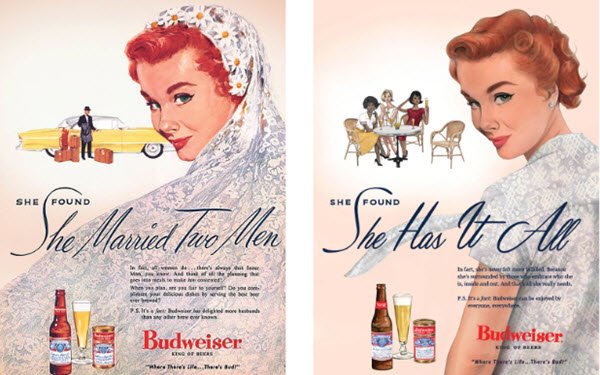 These days, brands that aren’t doing something to mark International Women’s Day (IWD) may be less prevalent than the ones that are.

Budweiser and Dove Chocolate are among the big names whose 2019 efforts stand out.

Bud announced it’s becoming a member of #SeeHer, the movement to advance more positive portrayals of women in advertising. According to Bud, currently just 61% of ads positively portray women.

To kick off the partnership, the beer brand that's had a he-man image for decades reimagined three of its own ads from the 1950s and '60s to show women in more balanced and empowered roles.

In addition to being featured on Budweiser’s social channels, the before and after ads (one set shown above) are appearing in The New York Times, Chicago Tribune and Los Angeles Times today, to mark IWD. Each ad speaks to a theme: independence, equality and fulfillment. The other two sets of ads are posted on the brand's Twitter channel.

Monica Rustgi, vice president of marketing for Budweiser, said that the brand has made a long-term commitment to get #SeeHer’s input and evaluation of its advertising creative before it is released.

In partnership with Care, the brand has begun establishing a new physical marketplace for women-led businesses in Cote d’Ivoire in West Africa — the cocoa source for Dove parent Mars Wrigley and most of the world’s chocolate makers.

According to the brand, 1,000 women entrepreneurs, community members and local dignitaries attended a ceremony this week in which the first stone was laid for the marketplace.

Set to open in July, the grid-connected marketplace will provide space for women to sell their goods and hold training and meetings, and be available for rent as another form of income.