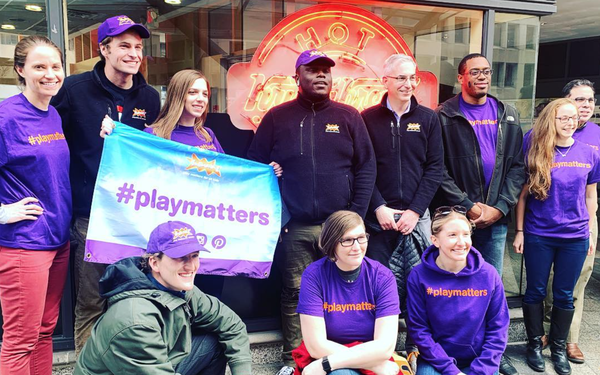 Krispy Kreme Doughnuts is launching the “Dough-nate for a Doughnut” campaign to support two children’s charities, Kaboom and the SeriousFun Children’s Network.

Now through May 4, customers can donate a $1 or more to benefit both organizations at participating Krispy Kreme locations and receive an original glazed doughnut in return.  The microsite for the program includes the headline “Be Sweet By Helping Others.”

SeriousFun Children's Network, founded by actor and philanthropist Paul Newman, is a global community of 30 camps and programs serving children with serious illnesses and their families, always free of charge. Kaboom is a national nonprofit dedicated to giving all kids -- especially those living in poverty -- the childhood they deserve through  safe places to play.

The "Dough-nate for a Doughnut" campaign builds on Krispy Kreme's history of giving back to communities, including through its “FUNdraising” program, which assists organizations and businesses by helping to raise millions of dollars annually for educational, religious, community and charitable causes.

Giving back to communities through fundraising and philanthropic work is at Krispy Kreme’s core, says Krispy Kreme CEO Mike Tattersfield.

"We passionately believe in the KaBOOM! mission to build strong communities through enabling play, and we have experienced firsthand the incredible impact SeriousFun camps have on children and their families,” Tattersfield states.

"Our work is centered around bringing people together to ensure kids have a place in their community to thrive," states Lysa Ratliff, Krispy Kreme vice president of partnership development.  "A great, safe place to play shouldn't just be a treat for some kids, it should be accessible to all."