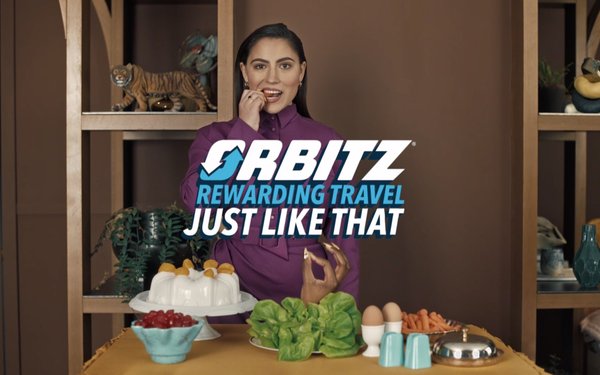 Travel platform Orbitz is making its first foray into traditional TV in nearly a decade, beginning with local market efforts in four key markets including its home base, Chicago.

"Millennials are still watching TV," explains Carey Malloy, director of brand marketing, Orbitz. "They are just watching it in different ways. In order to maximize our ability to reach our target audience we focused on the right mix of creative assets, messaging and spend across a variety of channels including linear TV, connected TV, digital video and social media."

The "Just Like What?" campaign was developed by Orbitz with the Havas Chicago creative team. It serves as the second iteration of the brand’s continuing campaign

“Just Like That" incorporates surreal, random snippets, like a hotel clerk unveiling a platter with a human hand, to suggest that Orbitz rewards program offers instant privileges.

This creative is aimed at older millennials — perhaps fans of Wes Anderson's "The Royal Tenenbaums" — who have busy schedules but still prioritize travel.

"The campaign’s off-center, strange, and surreal tone was as intentional as the wardrobe, color palette, and soundscape of the spots," says an agency spokesperson. "No detail was overlooked in exploring the peculiar world of our Orbitz travelers’ psyche. The ads intend to reel you in, mesmerize you, and then surprise you that it’s about travel at all."

Last year the Orbitz brand relaunched with a refreshed look and feel as well as a clearly defined brand promise to help differentiate the company in a crowded online travel market, says Malloy.

"2018 was very focused on testing and learning in digital channels," says Malloy. "This year we have applied those learnings to our approach to linear TV. We still feel it’s an important mass channel to be present in from a reach perspective. and we are able to add a layer of strategic thinking to our buy from our 2018 digital spend."<