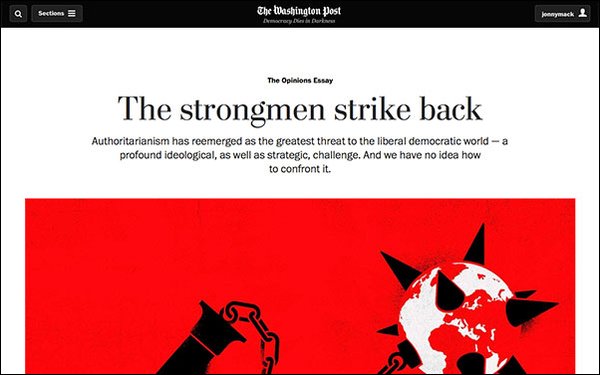 The Washington Post is giving long-form opinion essays their own platform, called The Opinions Essay.

The essays will appear online and in print, featuring graphics, analysis and insights on a range of topics, including politics, foreign policy and health.

The first installment nears 10,000 words and is penned by Post Opinions columnist and historian Robert Kagan. The essay tackles “the ideological challenge from authoritarian regimes that are endangering a liberal democratic world.”

“Authoritarianism has reemerged as the greatest threat to the liberal democratic world — a profound ideological, as well as strategic, challenge. And we have no idea how to confront it,” reads the subtitle.

The essay was published online March14 and appeared as a four-page, print supplement in The Washington Post’s Sunday paper.

The Opinions section began experimenting with long-form opinion storytelling last year, with Elizabeth Bruenig’s piece."She reported her 2006 rape. Then nothing happened. In the #MeToo era, what do we owe her?" and David Ignatius’s column, "The Khashoggi killing had roots in a cutthroat Saudi family feud."

The two stories ranked in the top 10 most read and highest-engaged opinion pieces in 2018 at The Washington Post.

On Wednesday morning, The Washington Post Live will host "The Opinions Forum" to highlight the issues in Kagan's essay. Foreign policy leaders are slated to discuss the rise of nationalism and threats to democracy.