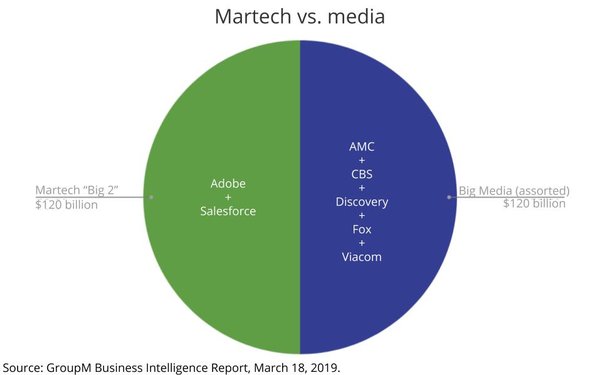 Martech is a multi-billion industry dwarfing ad tech and rivaling the overall media economy yet it is barely on Madison Avenue’s radar, WPP’s GroupM unit asserts in a new Business Intelligence report published this week.

The two biggest martech -- or marketing technology platform -- players are Salesforce and Adobe, which generated $11 billion and $9 billion, respectively, last year, and GroupM Global President-Business Intelligence Brian Wieser estimates “many tens of billions of dollars” are spent on long-tail players that get less attention than the two big publicly traded, cloud-based platforms.

“By market capitalization, the two companies are each worth around $120 billion, or more than the combined value of CBS, Viacom, Discovery, AMC and the new entity which houses Fox,” Wieser writes -- referring to the new Fox Corporation, which unveiled its corporate structure today, including board members like former Speaker of the House Paul Ryan and former long-term News Corp. honcho Chase Carey.

“This will not be a do-over of ad tech, which is mostly about applying more automation and data to trading-related activities. Marketing technology goes much further by providing solutions helping marketers manage all of their internal workflows and engagements with consumers. Applied well, martech should improve the efficiency and effectiveness of marketing operations, allow for the use of more and higher quality data in the making of decisions and better tie media executions more tightly to evolving marketing goals.”