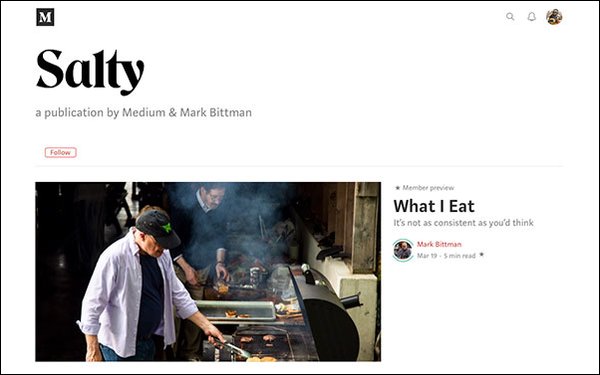 Food writer and editor and former New York Times columnist Mark Bittman is launching a new magazine on Medium called Salty. According to a report by The New York Times, the magazine’s first issue appears today on the publishing platform.

The new title focuses on a wide range of issues centered on food, including stories about racism in the restaurant industry and a new parent’s changing relationship to food. Salty will also publish recipes.

Bittman said in The Times: “We’re doing practical stories that will help people see food in a way they haven’t seen it before.”

A cadre of media veterans will join Bittman, who has worked with New York and vegan meal-kit start-up Purple Carrot, in addition to publishing 20 books and writing for The Times for more than 30 years.

Ev Williams, founder-CEO, Medium, noted in The New York Times: “We’re optimistic there’s a better way for creators and consumers of information. Once the market breaks its addiction to advertising, that will be better for everybody.”

The post stated: “People turn to Medium to help them understand the world more deeply and find worthwhile ideas they can apply in their lives. So we are looking for quality publications that can do these things across all areas of knowledge and human experience (at least those that people want to read about).”

Medium pays a revenue share according to readership. For some titles, the platform offers a minimum guarantee of $5 to $50,000 per month to “help publishers get started and lessen the risk.”

According to The New York Times, Medium has given Salty a larger investment sum than other new publications, though the amount was not disclosed.