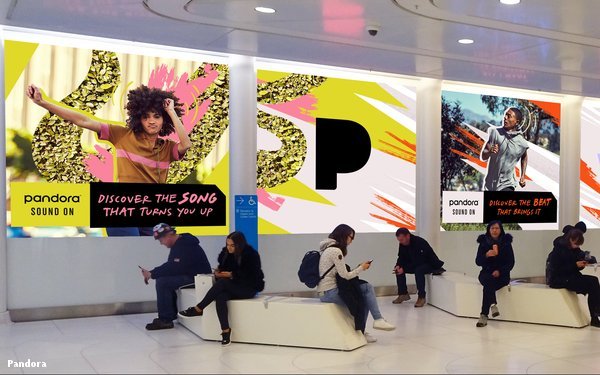 The streaming music service Pandora is roiling out a revamped brand campaign for spring.

The “Sound On” campaign will run in six markets for 12 weeks and include the debut of a "sonic logo," an audio signature meant for consumers to associate with the brand.

Pandora joins a number of other companies, including Chase Bank and Mastercard, that have created auditory logos.

“With the rise of connected devices, traditional and textual brand communications simply aren’t enough anymore,” Lauren Nagel, vice president-executive creative director, Pandora tells Digital News Daily. “We're entering into a sound-first world where its more important than ever for brands to be heard, not just seen.”

After conducting research, Pandora decided the logo needed to convey a number of attributes, including “energetic,” “Innovative,” “friendly” and “inviting.”

The company then commissioned 20 composers and sound designers, who created 200 possible logos, with Pandora conducting research to determine the final logo.

The “Sound On” campaign will run in New York, San Francisco, Oakland, Atlanta, Miami and Nashville, with takeovers in Times Square, the Oculus, the Nashville Sign and Oracle Arena, among other places. There will also be a robust digital presence across social media platforms and on Hulu, Vox Media and Group Nine Media properties.

“Our previous campaign centered on the idea that music and sound can help you escape a mundane physical space, and we received a ton of engagement around this concept,” Nagel says. “For this iteration, we doubled down on the idea of content in context, focusing on the amplification of spring energy and the spirit of discovery.”

Artists including The Jonas Brothers, John Legend, 2 Chainz, and Becky G will appear in the campaign, which will also include sound walls, a social-media sound board, and a “Sound On” lounge at select music festivals.