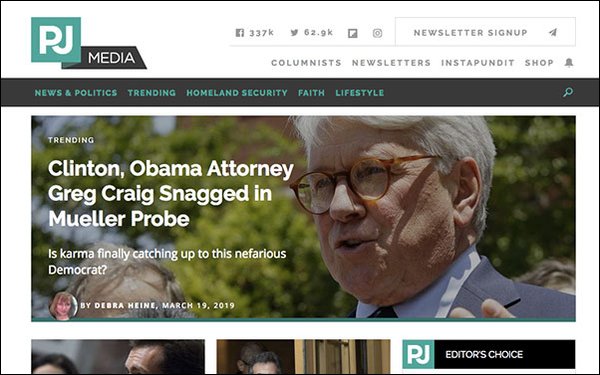 Townhall Media vice president-general manager Jonathan Garthwaite said the company's "reach at a critical point in our nation's history grows tremendously with PJ on our team."

The company claims the addition of PJ Media will increase Townhall Media’s reach to over 15 million unique readers each month.

PJ Media’s former CEO Aubrey Chernick said the transaction “is an opportunity to continue to expand PJ Media’s voice and brand and distribute its content to an even bigger audience.”

PJ Media was founded in 2004 by novelist and screenwriter Roger Simon and blogger Charles Johnson.

David Evans, Salem’s president of new media, stated: “In an age where many are struggling to figure out what a successful business model for online journalism looks like, we are continuing to grow and adapt in the changing environment.”

Salem Media recently sold Human Events to Raheem Kassam, the former editor in chief of Breitbart London, and lawyer Will Chamberlain. They pledge to bring new life to the conservative site.

Some conservative media companies have dealt with recent changes in the landscape.

TheBlaze and CRTV merged in December 2018, and its audience has surged 143% over the past year. It is now the second-largest right-wing political news source in the nation, behind Fox News.

The Weekly Standard was shuttered a few months ago, while its sister publication Washington Examiner is expanding for national distribution.

Jonah Goldberg, senior editor at National Review, and Stephen Hayes, former Weekly Standard editor-in-chief, are creating a conservative media company that will begin publishing newsletters this summer, with a website coming in September.