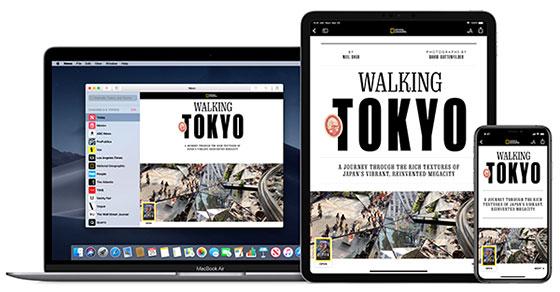 Say hello to the new and improved Texture app. Apple has launched a platform to access editorial content from a range of publishers, dubbed Apple News+.

Over 300 magazines and newspapers have signed up to partner with the service, which is built out from the Texture app — often called the “Netflix of magazines” — acquired by Apple last year.

Users pay $9.99 a month, with the first month free, in the U.S. and Canada, to access content from big publishers like The Wall Street Journal, Los Angeles Times, The Atlantic, National Geographic, theSkimm, Vox, Vulture, New York, TechCrunch, Grub Street and many Conde Nast media brands, such as Vogue, The New Yorker and Wired.

It will allow users to get behind the paywall many of those publishers have put up to increase subscription revenue and diversify publishers' businesses, given digital advertising's struggle to keep up with declines in print ad revenue.

In a memo to staff, Wall Street Journal publisher William Lewis said: “Our product offering for Apple News+ is designed to drive scale among new readers.” WSJ will likely give Apple News+ subscribers access to only three days of its content archive, with the rest exclusive to its full digital subscribers.

Notably, The New York Times and The Washington Post are not part of the service.

Mark Thompson, CEO The New York Times, warned that "relying on third-party distribution can be dangerous for publishers who risk losing control over their own product," reports Reuters. “We tend to be quite leery about the idea of almost habituating people to find our journalism somewhere else.”

Apple will reportedly take as much as a 50% cut in revenue made on the News+ platform. It will include advertising, but Apple lets publishers keep 100% of the ad revenue for ads they sell against their content, according to Axios.

Editors will choose what news sources and articles to surface on the Apple News+ app. Algorithms will prioritize engagement.

Lewis wrote in the memo to staff: "WSJ members will continue to have exclusive access to the rich business reporting and analysis about which they are so passionate. Apple News+ introduces an entirely new category of readers who will have the opportunity to experience a specially curated collection of general interest news from The Wall Street Journal. As a result, our newsroom will grow.”

Business articles can be found by searching on the Apple News+ app, but mostly general interest news is surfaced to Plus subscribers.

Despite other publishers' reservations about jumping onto a new platform and giving away content at a fraction of a full subscription cost, WSJ editor-in-chief Matt Murray assured staff: “The Apple venture is about more people seeing and paying for our journalism.”

Los Angeles Times owner and executive chairman Dr. Patrick Soon-Shiong has a similar belief in the Apple News+ app.  “We have every confidence the Apple affiliation will spur the growth of our digital subscriptions," he stated.

Lewis added The Wall Street Journal’s collaboration with Apple will “also extend to areas like video, voice, market data and AI,” and announcements will come in the following weeks and months. WSJ will hire “several dozen people in the coming weeks, including reporters in politics, U.S. news and features, as well as editors. More platforms and more audiences mean a greater need to deepen coverage to serve all types of readers," he noted.

Jennifer Hicks has been promoted to editor of news partnerships at The Wall Street Journal. She will determine the daily lineup on the Apple News+ platform.

The Wall Street Journal had 1.71 million digital subscribers at the end of 2018.