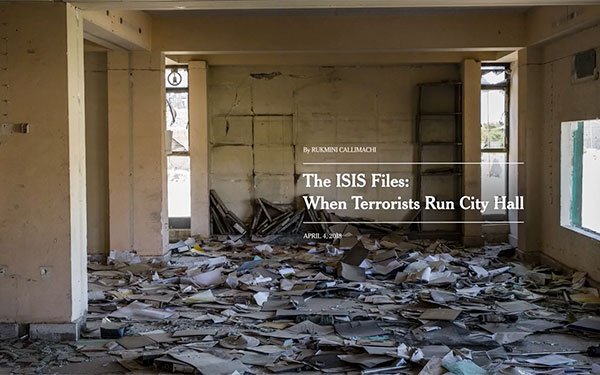 The New York Times today unveiled a short film spotlighting foreign correspondent Rukmini Callimachi’s reporting about the Islamic State in the latest installment of its “The Truth is Worth It” brand-marketing campaign.

The atmospheric film follows Callimachi’s work as she traveled to Iraq five times and discovered over 15,000 documents revealing the bureaucratic and brutal rule of the Islamic State.

Like other films in the series, the latest uses sparse, but effective text over video and photography. The opening sequence reads: “Source Leads to ISIS/Leads to ISIS Location/Leads to Final ISIS Stronghold in Iraq” as the words build upon each other to form new phrases moving the narrative forward.

The film will appear on various networks, including CNN, MSNBC and ESPN, and across linear television and streaming services like Hulu and YouTube. Social channels, including Twitter, will carry it.

The campaign is meant to educate viewers about the work and resources necessary for independent, in-depth reporting, with the ultimate goal of attracting more subscribers. Other journalists covering regions caught in conflict and political unrest, like Hannah Beech in Myanmar, have also been featured in the series.

Launched last fall, the campaign has resulted in six films to date. Other installments in the campaign have focused on migrant family separation, Donald Trump’s taxes and the perfect pie recipe.

The landing page for the campaign reads, “Piecing together the facts. Vetting sources. Connecting the details. The New York Times applies journalistic rigor to every topic we cover, in our mission to deliver what is critical to democracy — independent journalism with an unwavering commitment to the truth.”

The Times moved forward with the campaign as it saw anti-press rhetoric rise and news coverage and resources decline.