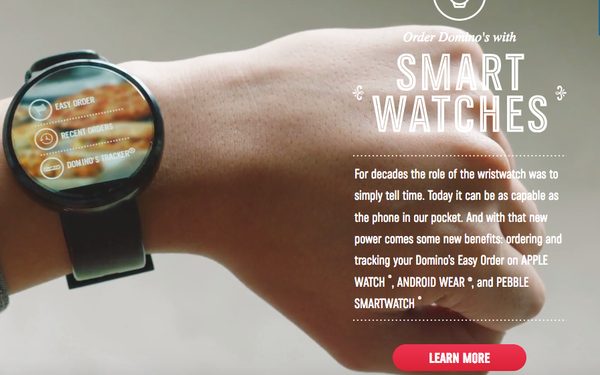 Ever since there was something called “interactivity,” one of its highest goals was to make it easy for consumers to order pizza -- first, from their cable box, then their laptop and their smartphone. And now, from their car.

Domino’s is teaming with automotive software supplier Xevo to create an in-car app that will let you order a pizza while you drive. The app will come preloaded in Chrysler and General Motors cars starting soon, but those automakers will announce which models will be packed that way later.

Actually, this deal just seems to be an extension of how Domino’s is already making it super-easy to get one of its pizzas. Its Anyware.com website lists more than 10 ways to use technology to order. TA Zero Clicks automatically orders your pizza ten seconds after you open the app. And you can use an Apple Watch, Twitter, Slack, Alexa and Google Assistant, etc. to order a hot pie.

Fords with SYNC AppLink already let those car owners order ahead for Domino’s.

One survey shows that 58% of diners don’t know where they’re going to eat before they head out to get food, so an in-car app could be a well-positioned influencer.

Xevo, with offices in Seattle and Tokyo, is a big tech player. Its Journeyware suite connects drivers to content and services, and Xevo Market connects customers to merchant offers through apps like the Domino’s one.

Xevo is already deployed in millions of cars, a company spokeswoman says, and that Domino’s app has a lot of competition. Other food brands with Xevo Market apps include Starbucks, Applebee’s, IHOP and Dunkin Donuts, along with Delivery.com and Yelp.