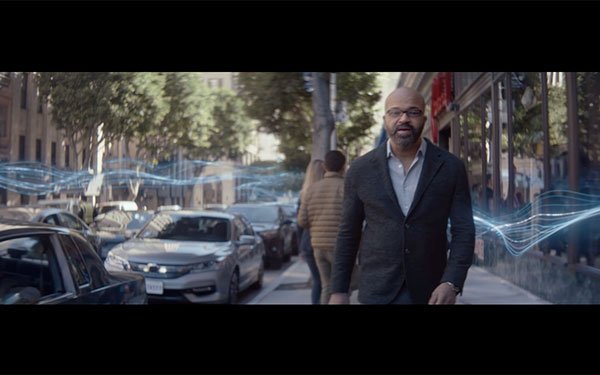 Dell Technologies and Y&R have relaunched the “Let’s make it real” campaign for the third year running, but this time the duo tied the campaign to virtual reality in the real world -- rather than beginning the spot on a magical stage -- to demonstrate real-world possibilities.

The series of three TV spots starring Jeffrey Wright -- best known for his role as Bernard Lowe in HBO’s Westworld series -- takes the viewer into the real world to “show the world what possible looks like when it’s made real.”

Last year Wright delivered the message from a sound stage. This year Wright interacts with objects out in the world to explain what’s possible with Dell, according to Liz Matthews, SVP of global brand and experiential marketing at Dell Technologies.

It has been three years since Dell formed the technologies group, but I “know there are a lot of people who understand our heritage in the PC market and think that’s all we do,” Matthews said.

The company will run one 60-second spot that tells the company’s story. The other two 30-second spots focus on two customers -- Draper, a Boston-based engineering firm for advanced technologies, and McLaren, an F1 racing automotive brand. Both customer spots highlight their respective work in healthcare.

The television spots will target viewers of live sports and live news.

These six DOOH ads, which are “simpler, bolder and use only four words,” will rotate during the first half of the year, she said, adding that other media buys include search, display and social.

The content created for the campaign also includes articles as well as podcasts, which Dell initially introduced a few years ago. The continuation of a weekly insertion in The Wall Street Journal will focus on the company’s competitive positioning in the marketplace.