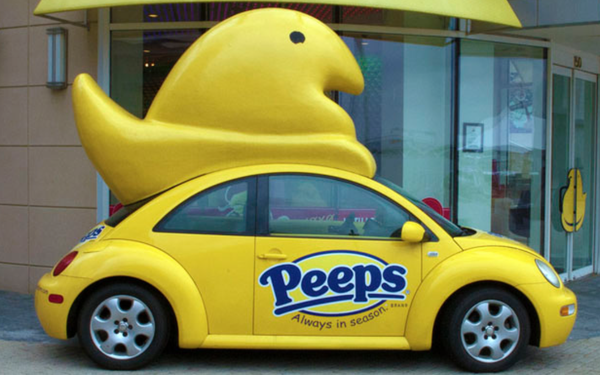 Peeps and Dunkin’ are partnering to offer fans new ways of consuming the iconic candy.

Beginning April 1, the candy will be featured in the Peeps Donut and new Peeps Marshmallow-flavored coffee and espresso drinks.

From April 2-4, Dunkin’s custom-sculpted coffee car will travel alongside the Peepsmobile, starting from the hometown of Peeps in Bethlehem, Penn. and heading toward Dunkin’s birthplace of Quincy, Mass. Along the route, both cars will stop at six Dunkin’ restaurants.

When the cars arrive, the first 250 guests will be offered a free small Peeps Marshmallow Flavored Iced Coffee, Peeps Donut and other giveaways.

Peeps has also joined with International Delight to offer a Peeps-flavored coffee creamer.

Peeps is also conducting a social media promotion, asking consumers whether they prefer the spongy candies to be in the shape of a bunny or a chick. The brand, around since 1953, is finishing up an “ultimate experience” contest. Through April 8, consumers who text PeepsUnited to 40403 and donate $5 to the United Way, will be entered to win a trip for four to Peeps headquarters where they will take a factory tour and go on a $250 shopping spree.