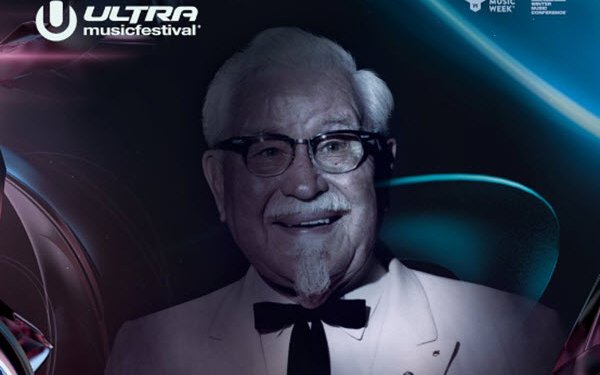 Is there no end to Colonel Sanders’ talents, or versatility?

Last November, Sanders — or more precisely, actor Craig Fleming playing the iconic-but-long-dead KFC founder — showed off his dirty dancing skills in a video in which he partnered with a Mrs. Butterworth bottle.

Now, he’s set to DJ during the Ultra Music Festival, a three-day electronic music event in Miami that kicks off on Friday, March 29.

Festival-goers have been buzzing about what the Colonel might be up to for several days now, since his name appeared in an Ultra events lineup showing that he’ll take the main stage for five minutes, starting at 3:55 pm ET, on March 29.

Now, KFC has confirmed that the gig involves DJ-ing of some sort — and that fans not in attendance will be able to experience it through the livestream on the festival site.

In his usual tongue-in-cheek fashion, "The Colonel" tweeted on KFC's Twitter account: "One thing a lot of people don’t know about me is that I have been a huge fan of electronic music for the last few days, and I can’t wait to show off the DJ skills I’ve developed in that time. SEE ME LIVE AT ULTRA on 3/29!"

The appearance is, of course, all part of KFC’s strategy to keep the brand ever-visible — not only through advertising, but through the social exposure generated by having the Colonel constantly pop up in unexpected places, doing surprising things.