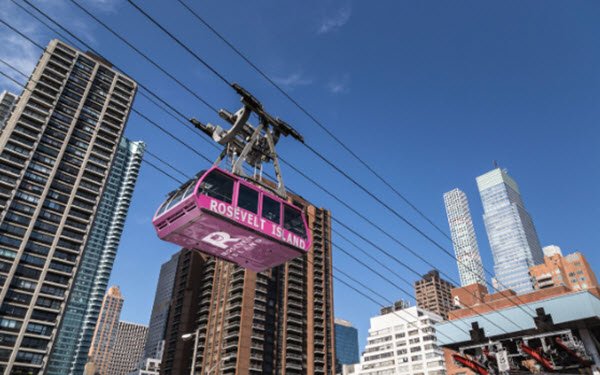 The brand, working with Burson Cohn & Wolfe (BCW), has created a video (below) purporting that, as one response to a declining high-end real estate market, New York City officials agreed to rebrand the 150-acre island in the East River to make it a “permanent” party destination for the rosé vodka, which was launched last April.

Through the magic of digital, the video shows various objects — including the island’s cross-river tram to Manhattan and its buses — seemingly recolored in pink and white and bearing the Rosévelt Island name (and in some cases, images of the Three Olives Rosé Vodka bottle).

In reality, there are no physical wraps or activations planned for April 1. But the team created a dedicated website, RoseveltIsland.com. The site offers rosé-crazed Millennials info on getting to the island and the “best places to get that perfect selfie” for their social feeds, like “skyline photos taken on the newly pink Rosévelt Island Tramway, the pink-hued subway stop and island boardwalk.”

The campaign’s other real, April 1-timed elements include promotions on the brand’s social channels, advertising wraps on Metro NY and amNY issues, a sponsorship of Cheddar’s Need2Know newsletter, and a “microinfluencer” program.