New Drama's Heroine Is A Trainwreck, And Also Blind 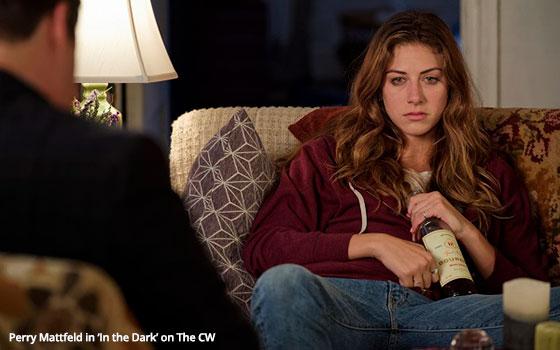 Too often these days, TV dramas will add pop music to scenes in which producers apparently feel the drama is not heightened enough or otherwise expressed adequately.

This new drama coming to the CW this Thursday called “In The Dark” lays the music on especially thick at least four times in the premiere episode in scenes that should have been dramatic enough on their own, but were not.

You know the drill: A grown child reconciles with a parent, and sad music begins to play. Or two friends are having a heart-to-heart talk while strolling purposefully down a city street or through a leafless woods in winter. Cue music.

It is the TV Blog’s belief that if such scenes were better acted, written and choreographed, there would be no need for any of them to be enhanced musically this way.

Much of the premiere episode of “In The Dark,” even the scenes in which music was not added, plays as if it just misses the dramatic mark. The show is about an unhappy young woman who is an addict. Her addictions include alcohol, drugs and sex. To put it mildly, she has low self-esteem.

She also happens to be blind. So, while we have had plenty of addicted protagonists in TV dramas over the years (not to mention countless movies), this would seem to be the first such character who cannot see.

Thus, her unmanageable addict’s life carries this added burden that makes her life especially chaotic. And of course, there’s a metaphor here too, if one chooses to look for one: She cannot “see” the chaos she has created in her life and in the lives of those close to her.

In the premiere episode, she hits bottom, and seems to gain the ability to at least metaphorically visualize what she has done to harm others, in this case her parents. Whether she seeks help in future episodes either in therapy or a 12-step program remains to be seen. There is no sign of either in Episode One.

The character, named Murphy, is played by Perry Mattfeld, an actress who is not sightless. Playing blind must present many challenges for an actor because at times in “In The Dark,” Mattfeld’s performance is not wholly persuasive.

It is not entirely her fault. For example, in one scene, a man she is conversing with makes a gesture with one of his hands that is meant to illustrate something that he is saying. Judging by Murphy’s reaction, you cannot help but believe that she saw what he did. Writing the scene to include this hand gesture was careless.

The show’s first episode wandered all over the place. At various points, Murphy was a sex addict who said yes to anyone’s request to go to bed with her. At other times, she was a stone-cold drunk. Once sober, she was seen heading straight to the front of a drugstore line in front of other customers. She even demonstrated little or no affection for her seeing-eye dog.

In addition to all that, she is a drug addict who habitually visits the same dark alley (or perhaps a blind alley) to meet a young African-American drug dealer whom she befriends.

Then when he goes missing, she turns amateur sleuth and turns up a vital clue that eluded the clueless police department.

All this, plus she works as a receptionist at her parent’s place of business -- some sort of facility for the blind that also trains and places guide dogs (or at least this is what I think they do; this was not entirely clear).

The problem is, Murphy is generally seen at her workplace sleeping off her last binge, and in the process, behaving rudely to people who visit the facility. Two of them are a couple who wish to donate $10,000. After they encounter Murphy sleeping one off on the bench of an outdoor picnic table, they gladly entrust her with this $10,000.

The scene makes no sense, which can also be said for this show in general.

tv
1 comment about "New Drama's Heroine Is A Trainwreck, And Also Blind".
Check to receive email when comments are posted.
Next story loading