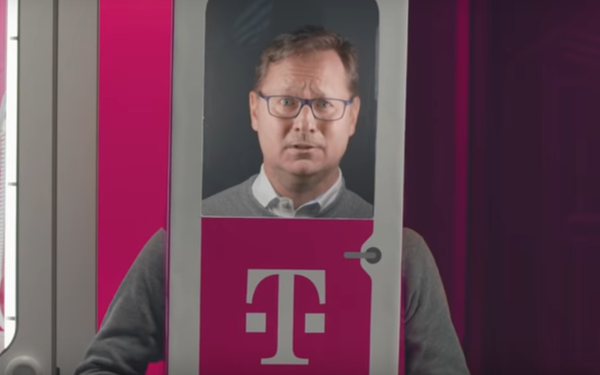 The hyperaggressive marketing by wireless carriers took a giant, nutty leap over the weekend when the T-Mobile Phone BoothE was introduced in New York City, Washington D.C. and Seattle,  T-Mobile’s headquarters city.

“Phone BoothE is a vertical, rectangular cube with advanced features that will blow your mind,” says T-Mobile CEO John Legere in a new video ad, touting its “quadrilateral technology.” In a noisy world, T-Mobile says, it’s offering peace and quiet.

Today, April 1, based on what the company said was the overwhelmingly positive response to the phone booth, it introduced the T-Mobile Phone BoothE Mobile EditionE (MEE), a cardboard contraption that users wear like -- well, here’s what the ad says: “It is literally a box that you place on your head. It is compatible with every device because, again, it’s a box.”

A press release ads some details: “With a clear plastic window so you can see where you’re going (so long as you’re going straight ahead and don’t need your peripheral vision) and solid cardboard construction, the MEE features none of the groundbreaking soundproofing technology of the Phone BoothE because it’s literally a magenta cardboard box with a hole in it. But it does make a declarative ‘do not disturb’ statement and a fashionable head accessory.”

Speaking of statements, both inventions let T-Mobile tweak AT&T. Showing off the new phone booth’s dubious technological advancements,  T-Mobile CEO John Legere looks into the camera and says “You know it’s real because we tacked an E at the end of it. Wow!!”

That’s a slap at AT&T’s much-derided 5GE label for wireless service that is not quite 5G but is a step up from 4G. The E in the AT&T universe stands for “evolution.”

It seems apparent (or logical) that the Phone BoothE won’t live long after today, but T-Mobile never gives the wink that companies launching these kinds of products around April Fool’s Day usually provide.

An email request for clarification wasn’t returned, but an FAQ advises customers to  “stay tuned to see when/where/if the T-Mobile Phone BoothE will roll out to other cities.” (The “if” is a big clue.)

The press information also includes information about a Phone BoothE app available from the App Store that lets users unlock the BoothE so they can enjoy a private call, or use the app to reserve a Boothe nearby.

But the Website MacRumors.com said the app idea was part of the joke and compared this stunt to last year’s, when T-Mobile marketed, for the day, a sneaker with a built-in smartphone.