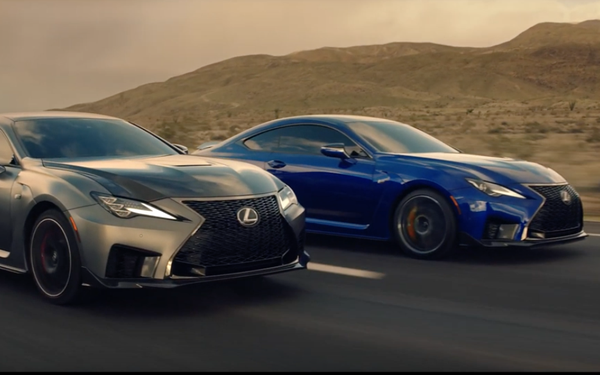 The Lexus 2020 RC F Track Edition is not for everyone — in fact, its production is limited. But as with any cool product, there’s a halo effect that should help sell the rest of the RC lineup.

The special edition was introduced at the North American International Auto Show in Detroit in January. The automaker has not revealed how many will be produced. They are available at dealers starting this month.

“We redefined sophistication, technology, and craftsmanship in the luxury segment, and we’re doing it again by redefining performance without losing sight of those key tenets,” Materazzo stated. “Lexus’ legacy was not born on the racetrack, but -- as the ads highlight –--these coupes are built for speed.”

Two 30-second spots, “One-Track Mind,” and “Fast,” include voiceover by Minnie Driver and are from Team One, Los Angeles.

“One-Track Mind,” features slot cars racing around a track. Suddenly, an engine roars, and the RC F Track Edition enters the race, deftly weaving in and out of the slot cars and disrupting the status quo. The voiceover states: “Introducing freedom from the bounds of convention.” The RC F Track Edition takes a dramatic turn off the track towards its own road, where it’s joined by the Lexus RC F.

The second spot, “Fast,” opens on an old jet car that’s quick but choppy as it speeds along a straight road. The narrator poses the question “Is fast enough?” and cuts to footage of the Lexus RC smoothly navigating city streets.

The ads will run nationally on prime-time, cable, and late-night programming and will be featured during high-profile sporting events including the March Madness Final Four and NCAA Division 1 Men’s Championship game, the Indy 500, NBA playoffs and NHL Stanley Cup playoffs.

Lexus also collaborated with Wired to host a series of interactive videos produced by Satellite Lab to take an in-depth look at key features of the RC Track Edition.

GQ viewers can join a virtual all-access city tour at the helm of the RC.

MotorTrend will present a viewing experience where spectators can get in the driver’s seat with Lexus pro drivers Scott Pruett and Jack Hawksworth.