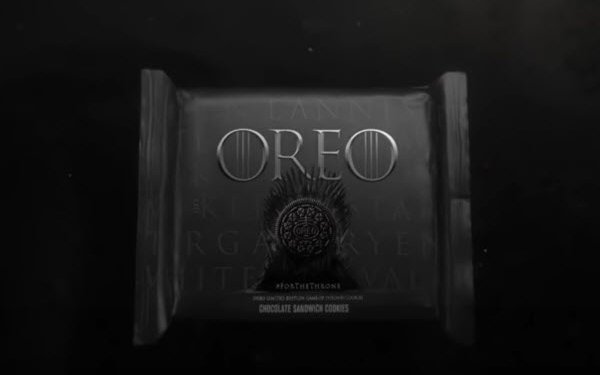 Oreo is the latest big brand to announce splashy tie-ins with the final season of HBO’s phenomenally popular “Game of Thrones,” which debuts on April 14.

The world’s bestselling cookie brand has created four limited-edition cookies -- three embossed with the sigils (coat of arms images) of the Lannister, Targaryen and Stark houses, respectively, and one embossed with the face of the White Walker Night King.

The special-edition cookies, available starting April 8 in stores around the country while supplies last, come in a black package that uses “GoT”s typefont for Oreo’s logo (including the three vertical lines through the name’s “o”s).

Even more ambitiously, to promote the special cookies, Oreo, lead creative agency 360i and HBO worked with Elastic, the creators of “GoT”’s opening title sequence, to create a version of the sequence (below) in which the animated landscape is entirely constructed out of 2,750 Oreo cookies.

In addition to featuring the video on its social channels, Oreo is encouraging fans to visit its Facebook or Twitter channels, or oreo.com, and pledge their fealty to one of the “GoT” houses, using #GameofCookies and #ForTheThrone.

Oreo will offer surprises to some participants throughout the show’s season.

Oreo follows other “GoT” tie-ins that have included one of Bud Light’s Super Bowl LIII ads (which also promoted the show’s final season), and Mountain Dew’s “A Can With No Name” campaign.