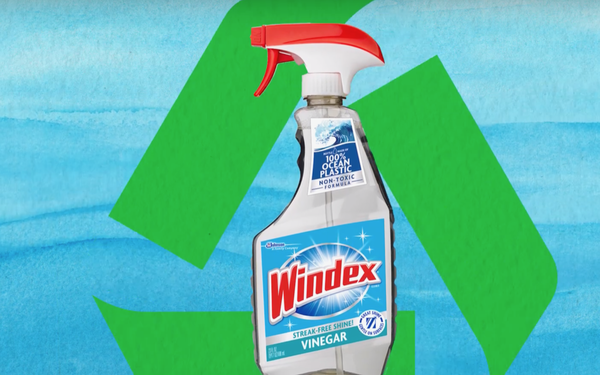 As consumer awareness of ocean plastic pollution grows, Windex is the latest brand looking to mitigate the damage it’s done to the world’s waters, partnering with Bloomingdale’s to raise awareness.

Windex, which recently launched a Windex with Vinegar product in a bottle made of 100% ocean plastic, says it’s bringing in-store experiences to the luxury retailer, including a window display at the New York flagship that features an aquarium of ocean animals made from recycled plastic.

S.C. Johnson says that in addition to the ocean plastic bottles, it’s switching all its Windex bottles to 100% recycled plastics, and is encouraging consumers to promote further sustainability by using its refill system. And it’s joining companies that range from L’Oréal to Procter & Gamble to Adidas to focus on ocean trash.

The partnership also includes a limited-edition Bloomingdale’s bag made from recycled plastic as a gift with purchase, a limited edition Windex bottle that people can customize in honor of their favorite beaches, and an interactive virtual-reality experience.

The campaign also comes at a time when consumer awareness (and dismay) about plastic pollution keeps growing. A spokesperson for National Geographic, for example, tells Marketing Daily that its “Planet or Plastic?” initiative has resulted in more than 150,000 people pledging to use nearly 200 million fewer single-use plastic items. With 50 million earned social media impressions, the content -- which generated many of the most horrifying images you’ve likely seen in social-media newsfeeds -- is also part of a 20-country consumer-awareness campaign.

Last year, a video of a sea turtle with a straw lodged in its nose got tens of millions of views, sparking a widespread backlash against the use of plastic straws, changing policies at companies like Starbucks and McDonald’s.

Beauty brands, which have spent decades encouraging consumers to buy and toss zillions of the plastic bottles now bobbing around the South Pacific, are especially exposed. And smaller companies, such as Lush, are rushing in with alternatives like low to no packaging for its shampoo, conditioner and deodorant bars.

P&G’s Herbal Essences last month announced that it will begin incorporating ocean trash, with 25% of its bottles made from beach plastic in a limited-edition line, in a partnership with TerraCycle. The national take-back program, scheduled to begin in time for World Ocean Day in June, 2019, is part of P&G’s sponsorship of The Ocean Project.

And last month, L’Oréal’s Garnier announced it was committing to a 100% post-consumer recycled waste for its Fructis Sleek & Shine shampoos and conditioners by the end of the year.