FX Choreographs A 'Prestige' Series About Fosse And Verdon 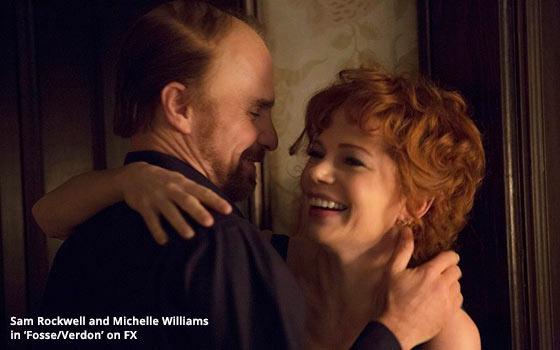 FX has another “prestige” series on its hands that will likely be critically acclaimed.

However, the question is: How many people will actually care enough about the lives, careers and marriage of choreographer/director Bob Fosse and dancer Gwen Verdon to watch “Fosse/Verdon,” premiering Tuesday night on FX?

The TV Blog had a similar reaction to “Feud: Bette and Joan,” also a limited series on FX about two A-listers from yesteryear -- Bette Davis and Joan Crawford.

Like “:Fosse/Verdon,” “Bette and Joan” was sumptuously produced, effectively evoking an era --  the early 1960s -- through the careful application of props, clothes and period settings.

And like “Bette and Joan,” which starred Susan Sarandon and Jessica Lange in the respective title roles, “Fosse/Verdon” enlists two top stars of its own, Sam Rockwell as Fosse and Michelle Williams as Verdon.

But in the end, the stakes never felt high enough to justify dramatizing the rivalry between Davis and Crawford. That series depicted the two stars in their older age at a time when opportunities for starring roles were scarce for women their age and somewhat limited to horror pictures such as “Whatever Happened to Baby Jane?,” which served as the series’ centerpiece.

The fact that they were no longer sought after as headliners in early-’60s Hollywood was hardly a tragedy.

“Fosse/Verdon” is a similar attempt to fire up the excitement of these two peoples’ lives, primarily for an audience who was not yet born during their heydays. While Verdon was the bigger star of the two before Fosse made his name as the director of “Cabaret” (according to this FX series), Fosse became such a big star as a director and choreographer that a movie was made about him in 1979.

Titled “All That Jazz,” Roy Scheider played Fosse. And Fosse directed this movie about himself -- which may represent the only time this has happened in the history of biographical movies.

As “Fosse/Verdon” opens, Fosse is directing the movie version of “Sweet Charity,” in which Verdon starred on Broadway. Shirley MacLaine got the starring role in the movie, which bombed at the box office (according to the miniseries).

In the miniseries, the next project for Fosse was the movie version of “Cabaret.” As the director, he is shown fighting tooth and nail to put across his own vision of how this movie should look and feel against the usual -- and broadly clichéd -- resistance from a grumpy studio overseer played by Paul Reiser.

Naturally, Fosse's approach is proven to be the correct one, since the movie was a smash. He won an Oscar for Best Director and the movie's star, Liza Minnelli, won a Best Actress Oscar that year (1973). Yes, there is a ’70s version of Liza in “Fosse/Verdon” -- played by an actress named Kelli Barrett.

In the title roles of “Fosse/Verdon,” Rockwell and Williams are just fine. They are true professionals who can do just about anything. In these roles, they get to humanize these two larger-than-life show business personalities. Their characterizations feel authentic, if not particularly likable -- especially Rockwell's Fosse, who is depicted as a driven, substance-abusing, unfaithful narcissist.

Like so many period dramas that have come and gone in the last decade or so in which the 1960s and 1970s are depicted, “Fosse/Verdon” also goes for a cigarette-smoking, booze-swilling, pill-popping ambience that seems cliché-ish by now in TV shows and movies about those long-gone decades.

When watching all the scenes of smoke-filled barrooms and rehearsal spaces, it is reasonable to wonder if somehow we as a society are nostalgic for that bygone era that existed before we learned that everything we enjoyed was bad for us.