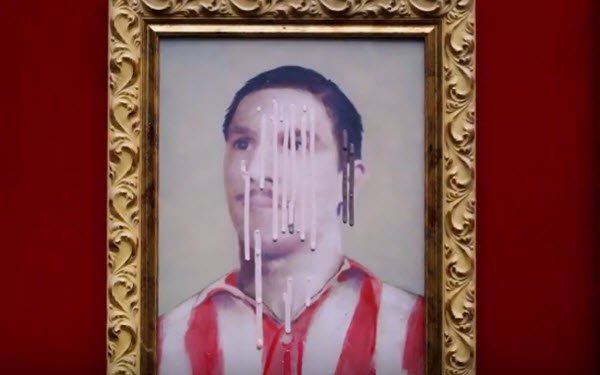 Gatorade’s newly unveiled 2019 international campaign, “Make Them Sweat,” adds a dollop of humor to the standard football-themed ad approach of footage showing the intensity of players on the field.

In the video, the two stars do indeed make their opponents sweat, in exaggerated fashion. But their performance also elicits sweat from fans watching on mobile, emojis, an image of someone’s mother, and hanging photos of soccer record-holders (above). In fact, the whole earth is shown shedding a cosmic-sized drop of sweat.

The video also weaves in footage of a fierce women’s soccer team in action, with more sweating galore -- including from a terrified spider caught in a goal net.

Following the digital debut, a version of the video will be aired in some, as yet undisclosed, markets in Europe and Latin America.

The campaign also employs illustrations by Brooklyn-based  Colombian artist Diego Patiño, which will be used across digital channels; and by football illustrator Dan Leydon, which will appear on a series of social stickers.