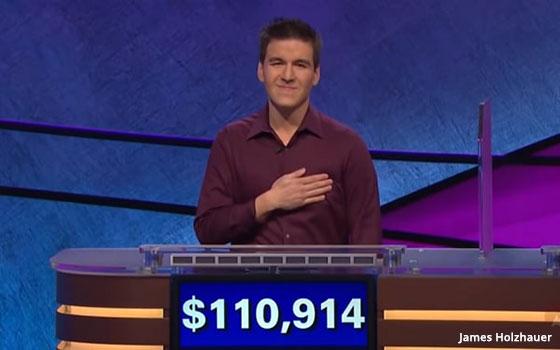 How much more action can a TV viewer take?

As if Monday night's overtime victory by the University of Virginia in the NCAA Finals on CBS was not exciting enough, then came Tuesday night's “Jeopardy!”

That was when the show's fans were treated to a performance for the ages as a 34-year-old contestant from Las Vegas piled up a one-day total of winnings that shattered all previous totals in the show's long history.

The contestant, James Holzhauer, lists his occupation as “professional sports gambler.” His gambler’s mindset was certainly on view and evident in his style of play Tuesday night on “Jeopardy” as he risked huge amounts in “Daily Double” wagers and then in “Final Jeopardy” to win a mind-boggling $110,914 in a single show.

It might very well be one of those records that will never be broken. His one-day tally beat the previous record by more than $33,000. That record was $77,000, won by contestant Roger Craig in 2010.

By the time “Final Jeopardy” rolled around on Tuesday night's show, Holzhauer had already run away with the show. He had long left the show's other two contestants in the dust, and there was no way they would catch him in the final segment, in which the category was “Physics Terms.”

At this point, Holzhauer already had amassed one-day winnings of $72,600. Then he wagered $38,314 and jaws dropped around the nation. It was a figure he likely derived from the birthday of a relative, as he explained earlier on the show, and it was a wager amount that few, if any, had ever seen on “Jeopardy!” before.

As it happened, all three contestants got the correct answer -- “What is quantum leap?” -- but by then all the attention was focused on Holzhauer. Throughout the game, he provided moments of risk and suspense with high wagers and clutch answers.

And even though the show had become a rout at around halfway through, Holzhauer's playing made for riveting, edge-of-your-seat television.

It was Holzhauer's fourth consecutive winning day on “Jeopardy!,” during which he amassed total winnings of $244,000, itself a record for a four-day stretch of wins on the show.

Now in its 35th season, “Jeopardy!” still astonishes. It is, quite possibly, the best traditional show seen anywhere on television (if not the best show, period). And now there is the additional poignancy of host Alex Trebek’s illness.

Trebek, 78, announced March 6 that he has been diagnosed with pancreatic cancer. But his illness is not yet evident on the show, since episodes of “Jeopardy!” are reportedly taped around three months before they air.

He reportedly returned to work, to tape new episodes, about a week after he announced his illness. But how long he can continue remains an open question.