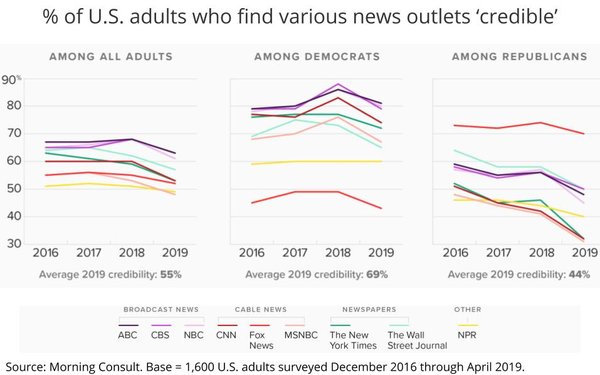 The perceived credibility of the major U.S. news organizations has been trending downward since the 2016 election, but most of it has been driven by sentiment from Republican voters.

According to the latest tracking from Morning Consult, the share of Americans rating the nine leading print and electronic media news outlets as credible has dropped an average of five percentage points over the past three years.

Most of that came from Republicans, whose credibility rating dropped an average of 12 percentage points over the same period.

“The New York Times and CNN, two of [President] Trump’s favorite rhetorical punching bags, have suffered the largest drops in credibility among Republicans,” the report notes, adding that, “In the months following the 2016 presidential election, most members of the Grand Old Party thought the New York Times (52 percent) and CNN (51 percent) had credibility; those figures have since dropped by roughly 20 points, with 32 percent of Republicans now saying each outlet is trustworthy.”