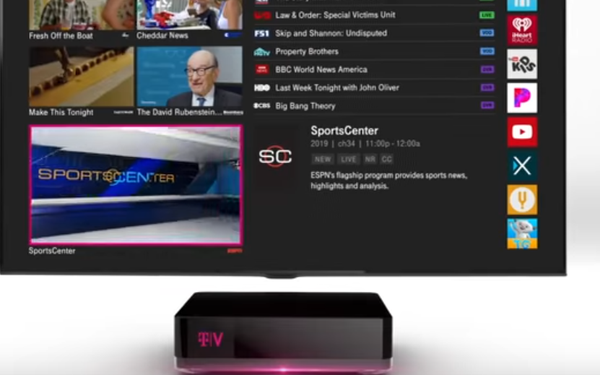 T-Mobile, which calls itself the UnCarrier, announced its new TVision Home service that will be available starting April 14 in eight cities.

But unlike other services offering “skinny bundles” at low prices to woo cable and satellite subscribers, TVision Home will offer 275 channels at $90 a month, rising to $100 for people who miss the introductory offer.

It does try especially hard to woo satellite subscribers, though. T-Mobile is  announcing Satellite Freedom, pledging to pay customers’ early termination contract fees for Dish and AT&T-owned DirecTV customers, up to $500, when they switch to TVision Home.

That T-Mobile slap at one of its biggest wireless competitors only goes so far: TVision Home will carry popular AT&T-owned cable networks like CNN, and provide the option to add HBO (for an additional fee).

“The Un-carrier has already changed wireless for good,  and today’s news brings us one step closer to taking on Big Cable,” said T-Mobile’s CEO John Legere. “I can’t wait to begin un-cabling cable and giving millions the opportunity to cut the cord with Big Cable forever.”

(T-Mobile, however, is contracting out with cable companies to do its service calls for TVision Home.)

The $100 a month price tag is not too far away from the average $107.30 T-Mobile says the average cable subscriber pays, though it does provide free DVR, which most cable plans don’t.

Add in taxes, and another $10 per connected TV, and TVisionHome doesn’t look very Un-Conventional, compared to Sling, YouTube TV and others. It even needs a set-top box, for now. T-Mobile says an app added later will allow users to watch on other devices.

But T-Mobile says “core to the Un-carrier’s TV strategy is that TVision Home works with the apps and hardware and services people already use. T-Mobile also unveiled plans to launch TVision Home on popular third-party TV platforms in the future. That means getting TVisionHome  will be as simple as downloading an app and picking from a variety of low-cost home or mobile subscriptions -- no extra box or equipment required.”

The new TVision Home is a reworking of Layer3, the IPTV cable provider it acquired last year. At first, it will be available only in New York, Los Angeles, Chicago, Philadelphia, Dallas-Fort Worth, San Francisco, Washington D.C. and Longmont, Colo.

TVision Home says it will use AI to suss out what viewers watch and want to watch -- ”TV that learns you” --and make that content easily available through the user interface. Subscribers can go to other streaming services, but apparently, three big ones, Netflix, Amazon and YouTube, won’t be there until later.