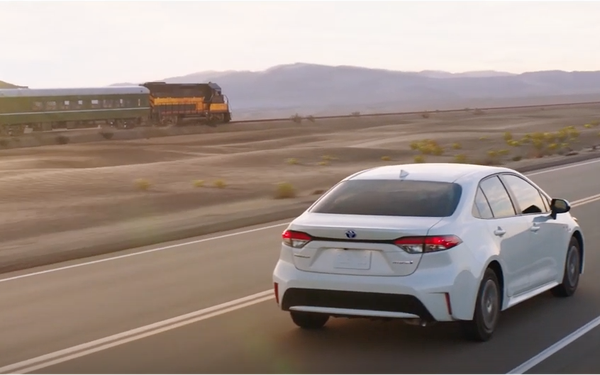 Toyota is calling on the talents of Chaka Kahn, the Queen of Funk, for the music in one spot in the new Corolla campaign, launching today.

The all-new The 2020 Toyota Corolla “Greater Than” campaign features “Rainy Day,” a spot in which Kahn gives her interpretation of the iconic “I Put a Spell On You,” a 1956 song written and composed by Jalacy "Screamin' Jay" Hawkins. Toyota shot  ‘"behind the scenes" footage with Khan.

“The all-new Toyota Corolla sedan dares to make life a little more adventurous,” Laukes states. “Given how popular the Corolla sedan is, this campaign really turns up the volume and inspires drivers to leave their mark.”

A series of 30-second and 60-second broadcast and digital spots were created using insights aimed at a transcultural mainstream audience. The spots highlight specific vehicle features while inviting drivers to stay inspired by choosing the road less traveled.

In “Rainy Day,” a couple turns the mundane task of getting a car wash into an adventure. “Train” portrays a reunion of a couple who doesn’t like “goodbyes” backed by music from Ricky Nelson, and introduces the U.S. market’s first-ever Corolla Hybrid.

Five spots -- “We,” “Sound Off,” “Refuel,” “Battle” and “Rescue” -- capture the spirit of an expressive, but straightforward and determined generation. “Metalhead” and “All Natural” feature a parent and an influencer jumping into the unknown, even if it means getting a little uncomfortable, to show support for their family and  community.