It's The Money, Stupid 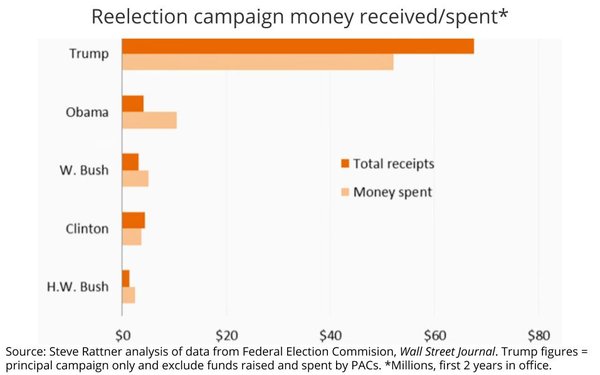 While the big focus this week is on the funds raised by the 2020 Democratic presidential primary contenders, the real story is in the war chest accumulated by the incumbent — and what his campaign is doing with it.

Following first-quarter Federal Elections Commission filings by the Democrats, the party’s story is the dominance of funds raised by Bernie Sanders, and secondarily by Kamala Harris. But it is two relative newcomers -- Beto O’Rourke and Pete Buttigieg -- that analysts are trumpeting as the story within that story.

“The big news here is Beto O’Rourke, and particularly, Pete Buttigieg,” Republican campaign strategist and MSNBC contributor Rick Tyler said on “Morning Joe” Wednesday, noting that while Sanders and Harris have had relatively established campaigns, the relative “grassroots support” demonstrated by the O’Rourke and Buttigieg campaigns “is very interesting.”

But the big story isn’t on the Democratic challengers, MSNBC analyst Steve Rattner noted in a series of charts published this morning, but in the sitting President. His reelection campaign fundraising has been, un-President, er, I mean unprecedented.

“If you look at what’s been going on over the last two years, unbeknownst to many people … Donald Trump, from the day he entered the White House, began his 2020 reelection campaign and began raising money for it, both the $2,800 smaller checks that you’re allowed to raise, as well as money you’re allowed to raise through victory committees and super PACs and things like that,” he said. H

He estimates the President had raised $68 million — and spent nearly all of it — even prior to the first-quarter 2019 FEC reporting.

Most of it was spent on digital media, he noted, adding the fundraising and campaigning truly is unprecedented relative to any past sitting President.

“If you run down the list of his predecessors, all the way from Obama to Bush 41, you see virtually none of them did anything during their first two years in office, including raising money or spending money.”

The big question, Tyler noted, is what the incumbent President is doing with the money.

“Digital, like any advertising, only works if you have a message,” he explains. “And it’s really unclear to me right now, what Donald Trump’s rationale for his reelection is. What is his message? We understood what his message was: Make America Great Again, the wall, populist economics, which now Bernie owns.

“What is Donald Trump’s message?” he continued, concluding: “What is all that money going to say about his rationale for reelection? I don’t know.” 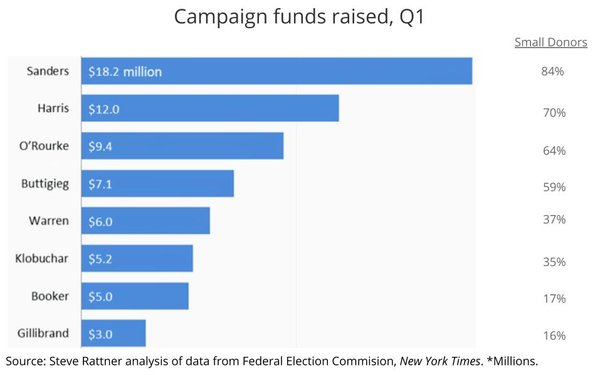