JERSEY CITY, NJ -- The second day of the Advertising Research Foundation's (ARF) annual two-day Audience X Science Conference here began with the empirically based “Rules of Marketing Effectiveness in a Digital Era,” presented by Les Binet from the U.K. office of adam&eveDDB.

Binet and his colleague Peter Field have been analyzing the Institute of Practitioners in Advertising (IPA, similar to the U.S.'s 4As) database of marketing campaigns from the IPA Effectiveness Awards -- which now total more than 1,500 and were accumulated over the last 20 years -- for statistically significant trends that reveal key principles in achieving advertising and marketing effectiveness.

They have produced a series of comprehensive reports via the IPA that highlight their findings, including “Marketing in the Era of Accountability,” 2007; “The Long and the Short of It,” 2013; “Media in Focus,” 2017; and “Effectiveness in Context," 2018.

For those who manage a significant advertising budget, these publications are a must read. The latest report underscores the need to flex the rules to suit a particular brand's situation or context along with the role of digital in the drive for effectiveness. Not surprisingly, they also reveal that best media practices based on empirical research have not changed much.

Here are a few key specifics:

* Brand-building produces a desire for the product and can reduce price sensitivity and increase profitability.

* Long-term campaigns are especially powerful if used with short-term sales activation with a general ratio of 60/40 for a typical brand.

* “Brand” campaigns are the primary driver of long-term growth and equity. Binet found that acquisition strategies outperform loyalty strategies as they expand the brand's base, adding that reach explains 91% of the variations in media effectiveness.

* Getting the creative right and balancing the message with emotions to produce memorability was illustrated by a TV ad for a very large British department store chain featuring a young boy's live/toy penguin that brought tears to viewers' eyes.

* Binet’s analytics still indicate that advertising is a relatively weak force that requires substantial media force at scale to drive brand effectiveness. There is no substitute for paid media, he said, and for growth to occur, the ad share of voice must be greater than share of market.

* There is no change to this principle, but it does raise the question of whether advertising is seen as a weak force because it must overcome the marketing ills of the brand -- the oxymoron “customer service,” lousy distribution, constant product issues, and more.

* Digital has been heavily used for sales activation, Binet said -- for tightly targeted, informative response efforts with low reach. Digital can be more effective if brand-building plans are increased in the mix based on broader reach with more memorable and emotional ads.

* As a last observation, he left the audience with this: “Digital makes sales activation easier, but…!”

Radha Subramanyam, Executive Vice President and Chief Research & Analytics Officer of CBS, called for the standardization of input metrics for attribution models, including proper reflection of how TV (video) is consumed to produce a meaningful ROI for TV across all platforms.

In terms of measurement, she noted, data comes in all sizes, as well as scope and dimensions, and often needs to be integrated.

She encouraged data harmonization, simplification and unification as much as possible.

Supporting the Media Rating Council's (MRC) proposed cross-media measurement standard, she urged the industry to “hold on to the :30 [as the] base length denominator," adding that it will matter when the duration-weighted viewable impressions element is added to the new standards in 2021.

“I am not done!," Wood quipped during her acceptance remarks, identifying an array of critical industry issues for which the industry needs answers, and which she hopes to tackle.

Dan Linton, managing director of analytics at W20 Group, addressed the question “Can Data Privacy be Good for Brands?” He suggested the answer is a definite “yes” -- which may seem a little surprising in the current environment -- if managed comprehensively.

Reminding the audience that “intrusion changes behavior” and that “the risk of harm is real,” he listed the most serious and massive corporate data leaks since the GDPR (an opt-in philosophy) went into effect in the European Union.

California passed the “California Consumer Privacy Act” (an opt-out philosophy) in June 2018, and Washington State, Vermont, Oregon, Illinois and even Texas are in the process of passing similar laws.

While the National Law Review recently ran the headline “Data Apocalypse,” and other publications have posited such headlines as “Chaotic Times Ahead,” Linton suggested that “GDPR has already had many positive effects – it generates trust."

* Generate business opportunities and benefits with and beyond privacy compliance

* Use trust as a means to give a reason to engage

Paul Donato, Chief Research Officer of the ARF, formally presented the foundation's new Code of Conduct. Notably, he said the ARF expects the majority of members to participate and earn the code-compliant seal of approval. The compliance element serves as a self-regulatory “supply chain of trust,” which has raised significant concerns by some major players in the industry.

Rishad Tobaccowala, Chief Growth Officer of Publicis Groupe, concluded the conference with intriguing insights and prognostications during a presentation entitled “Too Much Math.  Too Little Meaning.”

He focused on identifying six "P’s":

1. What's the Perspective? 5G is coming in 2020, which will make a smart TV a fully operational computer.

3. Provocation. It’s not the data that is missing -- it is the willingness and culture to change.

4. Purpose. What is the rationale? (Trust is a fact. So is truth-- what about emotion?)

5. Poetry -- how to get people to think higher and feel creative.

6. People. There are only two ways to change people -- move on or change one's mindset. This underscores the importance of being able to build a strong case for something you do not believe in.

Tobaccowala's future advertising perspective is that the ability to interrupt people with commercial messages will decline. The keys to brand marketing success, he said, are word-of-mouth scales, improving product service and identifying genuine spokespeople. Sound has an increasing role to play.

The last mass medium is network OOH. Marketers will require “personal experiences data at scale,” understanding that privacy is fundamental and must be controlled. 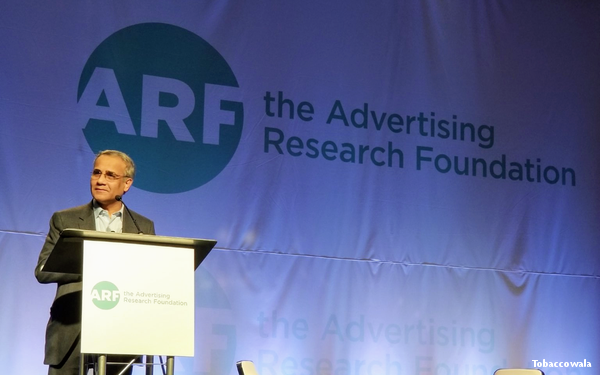