Audi Unveils AI:ME, Its High-Tech Car Of The Future 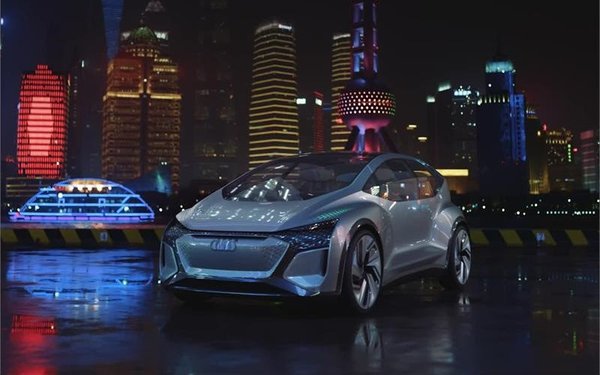 Audi has unveiled its autonomous car of the future at Auto Shanghai 2019.

The all-electric Audi AI:ME has the ability to drive autonomously at Level 4, meaning driving does not require assistance from the driver, though the function would be limited to a specific area, such as a highway or specially equipped area in a city.

The vehicle, called a “third living space” after home and workplace, uses technologies from the fields of artificial intelligence and machine learning and is designed to continually interact with and adapt to its surroundings.

Though designed for self-driving, the AI: ME is equipped with the traditional steering wheel and pedal controls.

The car features large stowage areas on the cockpit cover and between the front seats, with magnets serving as holders for magnetic plates or cups as occupants eat a meal while riding, according to Audi.

“The front seats are inspired by the classic lounge chair and feature a wide, comfortably cushioned seat, upholstered with textile material in warm shades of gray,” states the Audi announcement.  “The backrests are designed as curved shells attached to the seat cushion only with a vertical carrier. Drivers can rest their feet on the supports under the dashboard, such as on an ottoman. On the rear bench, which reaches around to the side sections of the car, occupants can vary their seating.”

Technology in the car includes eye tracking, voice input and touch-sensitive fields in the door rail. Lighting is activated only when approached. Virtual reality goggles are included for the visual output of the infotainment system.

The audio system is coupled with noise compensation, which can completely suppress the outside noise level.

The car also has real plants in the interior, which “gives occupants a feeling of proximity to nature and helps to objectively improve air quality in the automobile,” according to Audi.

The AI:ME will drive predominately between 12 and 44 miles per hour.

No price estimates of the vehicle were given.

automotive, iot
1 comment about "Audi Unveils AI:ME, Its High-Tech Car Of The Future".
Check to receive email when comments are posted.
Next story loading