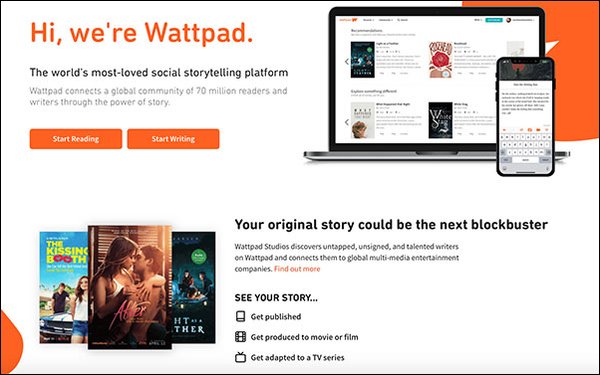 Wattpad has extended its partnership with Sony Pictures Television to develop original programming for television inspired by content uploaded to its user-generated storytelling platform.

Wattpad will give Sony a first-look at stories across its wide range of genres, such as fan fiction, sci-fi, action and romance. The two companies will work together to identify and co-produce popular stories from the half a billion uploads on the Wattpad platform and bring them to the screen.

The Wattpad homepage — before a user signs up or logs in — teases the potential for future production deals.

“Your original story could be the next blockbuster,” the homepage reads. “Wattpad Studios discovers untapped, unsigned, and talented writers on Wattpad and connects them to global multi-media entertainment companies.”

The deal will be overseen by Eric Lehrman, Wattpad’s head of content development and production.

Wattpad, Stampede and Sony Pictures Television had previously announced they are developing “Death Is My BFF” for cable channel SYFY. “Death is My BFF” is based on the popular Wattpad story by Katerina E Tonks, with 62 million reads on the platform.

As part of the new deal, Sony will also get access to Wattpad’s data insights from the 70 billion million monthly users the platform claims to have.

“Our entertainment partners all over the world have seen the power of our data-backed approach to IP discovery and development,” stated Aron Levitz, head of Wattpad Studios.

Nearly 1,000 Wattpad stories to date have been turned into books, TV shows, films and digital projects.

Earlier this year, Toronto-based Wattpad announced it had launched Wattpad Books, a direct publishing division that will publish Wattpad stories into books. Six young adult titles will debut this year.

A partnership with Huayi Brothers is adapting Wattpad stories for film, TV and digital media projects in Korea.

The popular Netflix film “The Kissing Booth” is based on a Wattpad story, written by Beth Reekles in 2011. Wattpad’s first feature film, developed from a Wattpad story called “After” by Anna Todd, is currently in theaters.