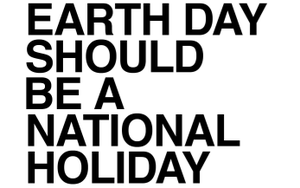 On Earth Day, North Face will close all of its 113 stores in the U.S. and Canada — along with its corporate office — so employees and customers can spend time outdoors.

Ahead of next Monday, North Face, partnered with 15 other organizations, has launched a global campaign to make the day an official holiday around the world.

“When people take time to appreciate Earth, they feel more connected to it and are more likely to protect it,” the petition states.  “We believe love for our planet comes from having the freedom to explore it, and that Earth Day should be recognized as a national holiday everywhere.”

Although you have to go online to sign the petition via the North Face website or Change.org, the company takes a dim view of the screen-obsessed Internet freak. “This behavior is hindering our ability to discover and make meaningful connections in the real world,” the petition says.

Lots of companies make an Earth Day gesture, but Alameda, California-based North Face has a nature-loving image built into its product line of outdoor sports gear and activewear. Last year the company featured a new collection of T-shirts and totes made from cotton and recycled bottles that it sourced from three National Parks’ trash, and donated $1 from every sale to the National Park Foundation to support sustainability projects.

This year, in addition to the petition, the company says it is going into “Explore Mode” and will be encouraging consumers to do the same.

“Explore Mode urges us to unplug from our digital lives to connect in real life to the world, each other, and ourselves in the effort to move the world forward,” said Tim Bantle, the global general manager of lifestyle for the brand.

All this week it has sponsored a series of musical, artistic, culinary and outdoorsy events in New York, San Francisco, Chicago, Boston, London, Manchester, Munich and Paris.

The company’s nonprofit, Explore Fund, launched in 2010, awards grants to "nonprofits working to create community and protect wild places in support of exploration,” according to the North Face website.

Customers in New York who participate in "Explore" activities will be rewarded with an exploration kit filled with “analog” gear -- off-the-grid outdoor ware.  That includes a non-digital camera to catch what was once called a “Kodak moment” -- when Earth Day was new.
cause-related, fashion, holiday, retail, sustainability
Next story loading