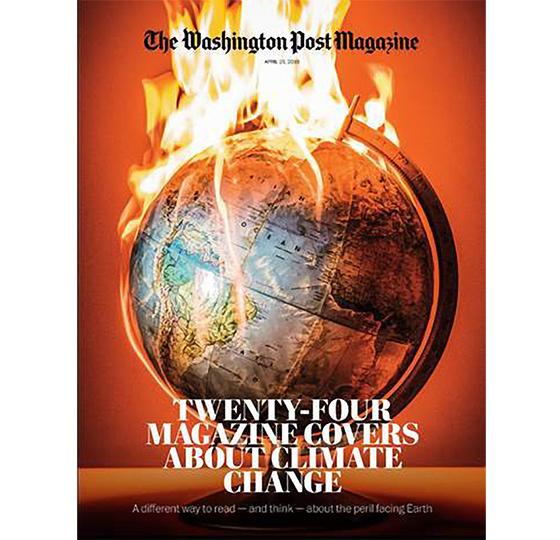 The Washington Post Magazine’s latest issue tackles climate change ahead of Earth Day on April 22, with 24 covers in the magazine each dedicated to overage of the topic.

The magazine gathered 24 stories it published in the past year addressing an aspect of climate change and created a cover for each article.

The first cover features a globe on fire, with the tagline: “A different way to read — and think — about the peril facing Earth.”

The intro to the magazine reads: “It can be tough for even the most conscientious citizen to fully engage with the scale of the crisis." Part of the problem, it notes, is the “sheer volume of bad climate news. For Earth Day, we decided to create a different way to read about climate change: an all-cover issue of the magazine.”

The stunning, bold covers are a mix of photography and illustration, from an image of the Sahara Desert for a story on how it is expanding to an imagine of a home underwater on rising sea levels. Articles also tackle growing wildfires, worsening hurricanes and melting ice caps.

Separately, The New York Times is airing a new TV ad on climate change ahead of Earth Day, featuring reporting from correspondent Nicholas Casey and photographer Josh Haner as part of its “Truth Is Worth It” brand campaign.

The campaign aims to educate viewers about the work and resources necessary for in-depth reporting, with the goal of attracting more subscribers. It is part of a growing trend among publishers to communicate to readers the importance of solid journalism, by revealing the reporting process.

This Earth Day ad is the latest in The Times’ “The Truth Is Worth It” brand campaign series, which shows independent journalism requires resources, time and commitment, and needs the support of subscribers to fuel this effort.

The ad takes viewers through the reporting process that led to its interactive investigation into the impacts of warming seas on the Galápagos Islands. The duo lived on a boat for seven days as they explored the Galápagos Islands’ ecosystem and wildlife. They uncovered a number of environmental effects of the warming climate, including sea lions dying prematurely, fish disappearing and birds becoming infertile.

The ad will air on linear and streaming television and across social channels, as well as The Times' print and online platforms.

In 2017, The Times created a team dedicated to Climate coverage and appointed Hannah Fairfield as its Climate desk editor.

Everlane is selling a “Climate Collection” of Times branded cotton crew T-shirts and French terry crew sweatshirts that read “Truth. It affects us all” to make the point. On the back of the shirts is a list, noting how consumers’ actions impact the environment, such as “What we put on our plates” and “How we travel.”